Top 3 Holiday Anime Episodes To Put You In The Spirit

It’s that time of year again! Time for people to come home and enjoy the holidays with their friends and family. Time to wear ugly sweaters and fluffy socks while trying to stay warm inside. When I’m home for the holidays, one of my favorite things to do is to wrap presents while watching some good holiday anime. It may sound like an odd combo, but everything’s better when it’s holiday-themed. With that, I give you the three best anime holiday episodes to put you in the spirit! Fair warning, minor spoilers ahead. 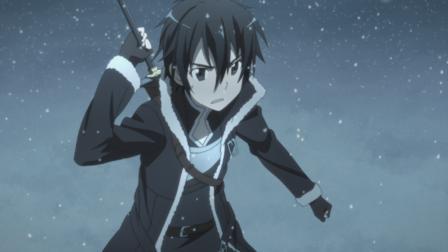 Kicking off our list is the SWORD ART ONLINE holiday anime special. The series follows Kirito and other gamers trapped in a virtual fantasy game by the game’s developer. If they die in the game, they die in real life. Cheerful, right? The holiday episode starts a few months before Christmas as they try to adjust to life in the game. To improve his chance of survival, Kirito joins a guild. Together, he and the Black Cats Guild train for months to raise enough money to build a home for themselves.

But on Christmas Eve, several members of the guild are killed by a trap set on the loot they were after. As it turns out, the trap was set by a Christmas event boss. Kirito vows to avenge his fallen comrades by killing the event boss (who strikes a disturbing resemblance to Chris Kringle). After defeating the boss, Kirito returns home to lament the loss of his friends. While mourning, Kirito plays a message from one of them. In the message, Sachi tells Kirito that everything is okay and that he shouldn’t blame himself for their deaths. Warning: things get pretty sad from here.

The episode ends with Sachi humming a Christmas tune as snow begins to fall. Kirito, like all of us, can’t help but cry. Merry Christmas to you too, SWORD ART ONLINE. While it can put a damper on your mood, this holiday episode reminds us that life is short and we should spend the finite time we do have with the ones we love. You may want to put down that gift you’ve been wrapping and give your nearest loved one a hug after this. 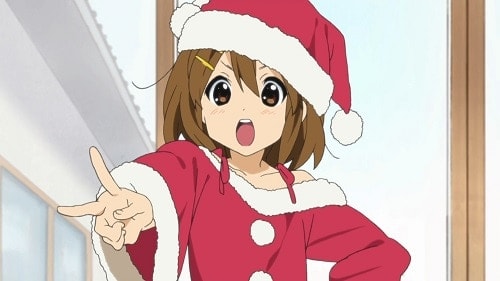 Sing a song for the holidays! | Image: Hulu

Taking a step back from all of the action and drama, K-ON! is a slice-of-life anime about four high school friends. Yui, Mio, Ritsu, and Tsumugi have worked together to help their school’s struggling music club. Over the years, their hard work has paid off. As a result, not only is the music club doing well, but the four of them have become renowned for their musical talent. Although the girls have found success in music, each new year of high school presents its own new set of challenges.

Right off the bat, this show feels familiar with its high school setting. An actual high school that is, not the classic anime high school with combat mechs and superpowers, where your main objective is to kill your homeroom teacher. Not a virtual school you’re forced to attend after being trapped in a video game. Just a normal high school, where students suffer through puberty and awkwardness, all while trying their best to make it through the day. Something we can all relate to.

During the holiday episode, Yui thinks back to the Christmases she shared with her sister when they were little. All her sister Ui wanted for Christmas that year was some snow. So, Yui cut up a couch cushion and decorated the backyard with the stuffing. After reminiscing, Yui decides to throw a Christmas party with her friends. From there, we get to sit in on a fun evening of gift exchanges and party tricks. Even the biggest action fan can admit that this holiday episode is worth watching. The flashback scenes are adorable and remind us to keep those important to us close. 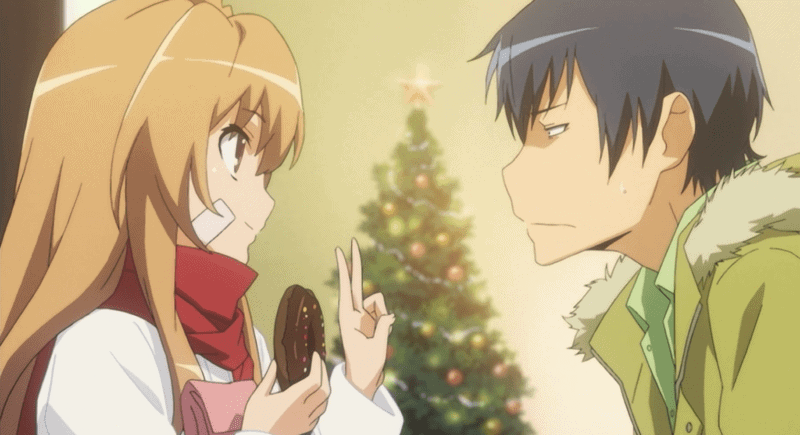 Tis the season for plots and pastries! | Image: Crunchyroll

Rounding off our list is another fun slice-of-life; with a comedic twist! TORADORA follows the story of high school friends Ryuji Takasu and Taiga Aisaka. The two didn’t get along when they first met, but they strike a friendship when they find out they are of use to each other. Taiga has a crush on Ryuji’s best friend and Ryuji has a crush on Taiga’s best friend. As a result, they decide to try to set each other up. This leads to constant antics meant to try to create “organic” romantic encounters. It doesn’t always work out if you can believe that.

In the holiday episode, Taiga gets back to school just days before Christmas after being suspended. She’s disappointed to find out that Ryuji hasn’t made any progress in talking to Minori (Taiga’s best friend). What’s more, Ryuji seems less confident than ever. His attempts haven’t amounted to anything so far and he’s having some self-image problems. Worse yet, Minori is having trouble with the school softball team, putting her in a bad mood and making it harder to talk to her. All in all, things aren’t looking good for Ryuji this year.

Luckily, the Christmas festival is coming up! Everyone at school is getting ready to attend and Minori seems excited to go. All of a sudden, it seems as though Ryuji’s fortunes may turn! From here, the episode dives deep into the relationships of each of the characters and reminds us to keep looking towards next year. While there is conflict, the holiday episode is lighthearted and fun to follow, making it a perfect holiday anime.

In the Mood for Some Holiday Anime?

Interested in any of these awesome holiday episodes? If you are, TORADORA and SWORD ART ONLINE are available on Crunchyroll, while K-ON! is available on Hulu. Which episode did you like the best? What are some of your favorite holiday traditions — anime or otherwise? As always, let us know in the comments below!