Being an Adult is Hard in THE DELINQUENT HOUSEWIFE Vol. 1

One of the most universal truths in the world is that not everyone is cut out for adulthood. Who can blame them though? Adulting is hard. But then you have people who are truly helpless. Soon-to-be-bride Komugi has never learned how to do housework. Without her fiancé, Tohru Komukai, Komugi is completely useless around the house. Prior to their wedding, Tohru and Komugi move into Tohru’s parents’ house. So when Tohru suddenly leaves on an indefinite business trip, the young bride is in an obvious panic. In THE DELINQUENT HOUSEWIFE Vol. 1, author Nemu Yoko crafts a wild tale as Komugi and her future brother-in-law try their hardest to hide her incompetence from her other in-laws.

It would be easy to view THE DELINQUENT HOUSEWIFE as a cautionary tale. But Vol. 1 offers a deep look into Komugi’s resolve to be the kind of person her mother-in-law would love to have as her eldest son’s wife. Short chapters allow the reader to focus on the important, formative moments in the characters’ lives. Yoko weaves together an emotional and comedic story with characters you can’t help but root for.

Throughout most of THE DELINQUENT HOUSEWIFE Vol. 1, the story is told through the eyes of her brother-in-law, high school student Dai Komukai. The manga does well in building up the mystery surrounding Komugi. Other than Tohru, no one in the family knows much about the young bride. The allegations against Komugi are pretty funny on their own, especially when Komugi’s strange behavior doesn’t seem to help the matter. Seeing how the characters speculate in comparison with the truth and Komugi’s own slip-ups are what make this manga a lighthearted, enjoyable read. 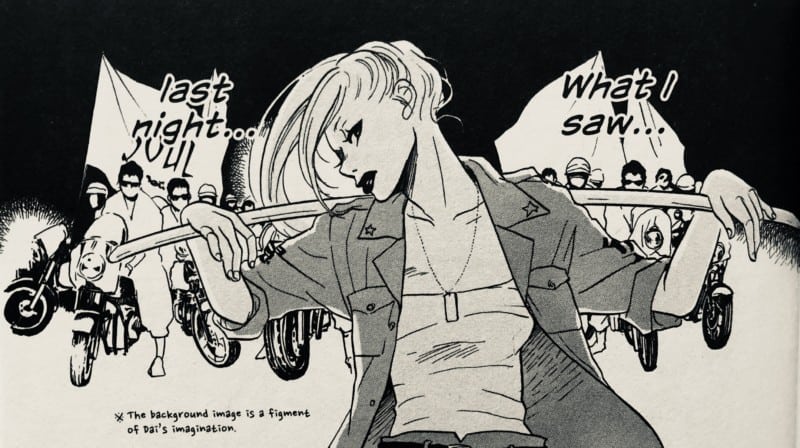 Dai couldn’t be farther from the truth. | Image: Vertical Comics

These slip-ups happen pretty often and the close-calls Komugi faces, as a result, are where the bulk of the manga’s comedy comes from. When Dai catches Komugi squaring up against a guy thrice her size, he steps in, only to discover that the man is Komugi’s best friend’s husband delivering her laundry. When Dai catches Komugi sneaking out of the house in biker gear, he quickly learns that its just to get a good discount at a local bar. THE DELINQUENT HOUSEWIFE Vol. 1 isn’t full of hard laughs. But, jokes like these keep the story moving while also setting up future, more serious arcs.

What Makes a Good Wife?

What’s truly admirable, however, is Komugi herself. It’s amazing that she made it this far on her own despite all the marks against her. Thus far, Komugi has been heavily reliant on her friends and her fiance. With Tohru gone, she’s just trying to make the best of a somewhat bad situation.

Komugi is afraid her future in-laws might reject her. While some might think that the manga reinforces the idea that a woman’s place is in the house, Komugi just doesn’t want to stay useless for the rest of her life. She also wants her future mother-in-law’s approval. And if it means getting a job and learning how to do basic housework, then so be it. She’ll do whatever she can to have a future full of happiness with Tohru at her side. But with Dai’s younger sister Yukari looking to sabotage Komugi’s relationship, things can become especially difficult. 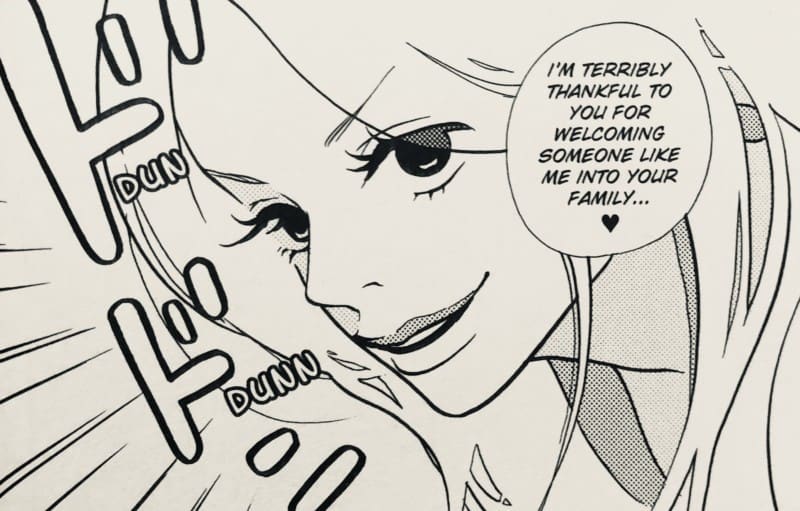 Despite the fact that there are people actively working against her, or the fact that she feels all alone without her fiance, Komugi’s incredible resolve keeps her going. She openly challenges Yukari when the young girl tries to kick Komugi out of the house. When forced to cook breakfast for the family, Komugi spends a whole day learning how to make a simple breakfast of eggs, boiled greens, and miso soup for them. She messes up… repeatedly. Yet the way she brushes off her failures and keeps on trying till she gets it right proves that nothing and no one will ever stop her.

One of the most interesting parts about THE DELINQUENT HOUSEWIFE is the lack of background imagery. Although it’s not completely without. Whenever a new scene starts, Yoko offers detailed backgrounds to her starting panels. But as the scene moves forward, the backgrounds fall away, leaving just the characters and their dialogue on the page. This, in my opinion, works in two ways. By not including any background details it allows all the readers to focus on the individual characters and how they impact the scene. When a single panel is filled with a single character’s face, it puts emphasis on that character and their dialogue. 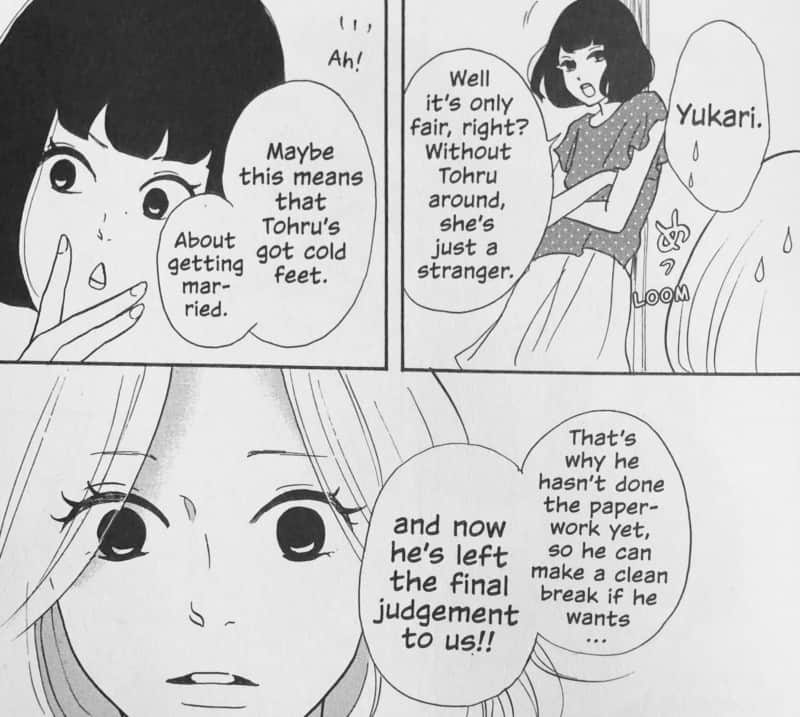 These background-less panels place the focus on the characters. | Image: Vertical Comics

The second thing this does is highlight the emotions of the story. These tight close-ups make sure that nothing is left to the imagination. When Yukari tells Komugi that Tohru likely left indefinitely to break up with her, you can see the contempt in Yukari’s face and the utter shock in Komugi’s in the photo above. Without flashy action or hysterical comedy, THE DELINQUENT HOUSEWIFE had to find other means to capture it’s audience’s attention. It does it perfectly with its simple design.

A Quick and Fun Read: THE DELINQUENT HOUSEWIFE Vol. 1

THE DELINQUENT HOUSEWIFE Vol. 1 is definitely a feel-good start to an interesting series. As Komugi finds her feet without Tohru to hold her hand, we’re bound to find more comical mishaps in future volumes. As she overcomes her problems, you can’t help but feel victorious as well. The second-hand stress Dai feels is contagious after all.

The end of the first volume definitely sets the mood for the next and I personally can’t wait to see how Komugi gets herself out of it. I’m also eager to see Komugi and Tohru talking for the first time after his sudden departure. THE DELINQUENT HOUSEWIFE Vol. 2 comes out November 20, 2018. Until then, I hope you enjoy the first volume as much as I did.

THE DELINQUENT HOUSEWIFE Vol. 1 is out now! Get your copy here.