- Use of tired archetypes
- Questionable treatment of women

Note: Spoilers for SEIS MANOS ahead.

When was the last time you watched a martial arts fighting anime based in 1970s Mexico? “Obviously never,” says the imaginary person I asked. Don’t fear, fake person. We have SEIS MANOS now. This show presents a setting rarely seen in anime. More than that, it’s well-presented and fun to watch. Sure, the promise of the unique setting is important. Who can deny more Latinx representation in media? But the quality of the show makes sure you stick around past the introduction. Having an anime based in Mexico might sound too good to be true, but SEIS MANOS is real. 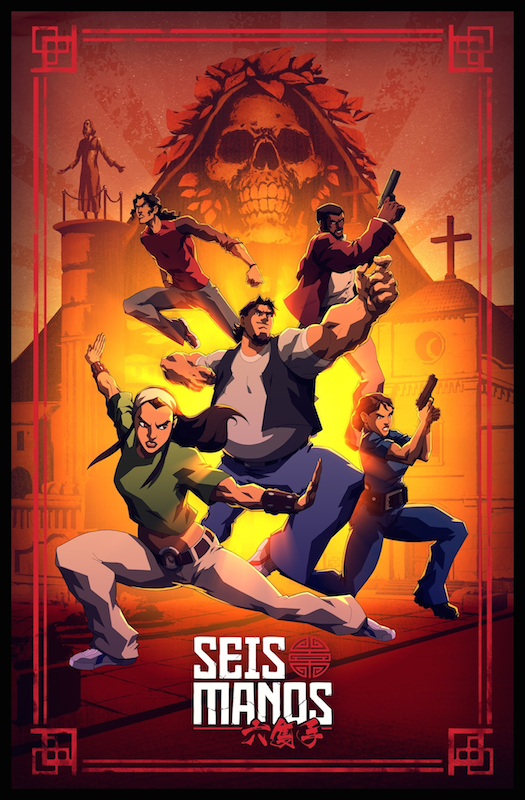 SEIS MANOS follows Isabela, Jesus, and Silencio, three young martial artists living with their adoptive father outside the sleepy town of San Simon. When a man-turned-monster ravages the town and kills their father, the siblings search for answers. Meanwhile, U.S. Agent Brister and local cop Garcia team up to puzzle out the same case. However, their search will uncover dark and mystic secrets lurking within their seemingly normal town.

This isn’t a simple mystery story. The stakes are high. Given the more graphic scenes, younger viewers should probably stay away. But if, like me, you’re an adult with a weak stomach, there are plenty of other things to focus on. Lose yourself in the show’s magical elements. Or contemplate the slowly unfolding plot. Even the fighting scenes, outside of the gore, are beautifully choreographed. These things elevate this already unique take on a 70s Kung Fu show. Let’s break SEIS MANOS down, and take a look at the components that make the show what it is.

The animation in SEIS MANOS is really solid. For the most part, this manifests in fluid animation. It’s most noticeable in the fight scenes, where they make each character’s motions unique. However, there are plenty of other moments where that fluidity shines through. It draws the viewer into emotional moments, like during Jesus’ reaction to learning of Chiu’s fate. To add to the fluidity, SEIS MANOS plays with effects. Every episode has a layer over it to make it look like an old film. It fit the show’s vibe so well that I didn’t even notice until episode three. This theme sets up some of the transitions they use later in the series. Once again, we also see an anime using 3D animation for its machinery in the form of the series’ cars. It doesn’t add or lose anything because of it, but it’s interesting to note its spread. 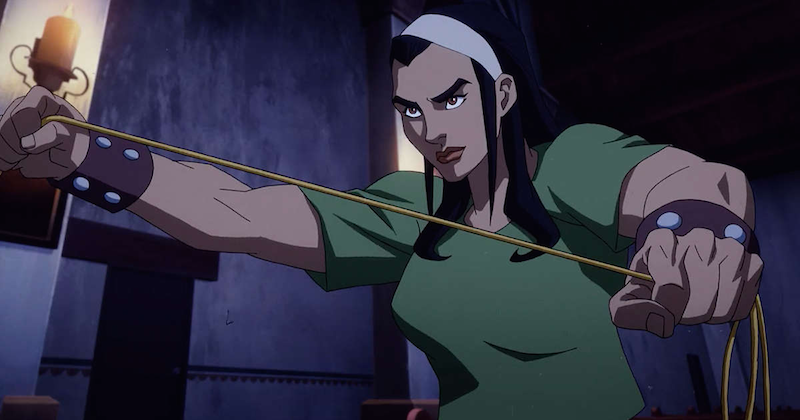 I’m so gay for those arms. | Image: Thrillist

One of my favorite parts in the series was the character design. SEIS MANOS is excellent at using shapes. Isabela is visibly buff. Jesus is both strong and round. Silencio is sharp and angled. Plus, who doesn’t love a guy shaped like a big square? (cough cough El Balde) In addition, each of the background characters are very distinctive. Not every anime or cartoon can say that. Even the henchmen, a typically homogenous group, vary widely. As a person who lives in the States, this was a welcome change of pace. A lot of media with Mexican characters rely on stereotypes for their designs. This is especially so for background characters. Having individual background characters is like a little extra “fuck you” to that racism-disguised-as-laziness. Plus it made it a little easier to tell who was getting killed which way.

While the characters may look individual, their personalities have room to grow. The creators rely heavily on archetypes for their cast. After all, the main cast consists of a lady cop trying to prove herself, a 70s caricature black cop, an angry trauma victim, a fat support character, and a dutiful older sister. Even the antagonists, like a cruel drug lord and a witch, are familiar to most audiences. Yes, the show is set in the 70s. And yes, it intentionally mimics the themes from the era. But many of us already know these characters before we even meet them. 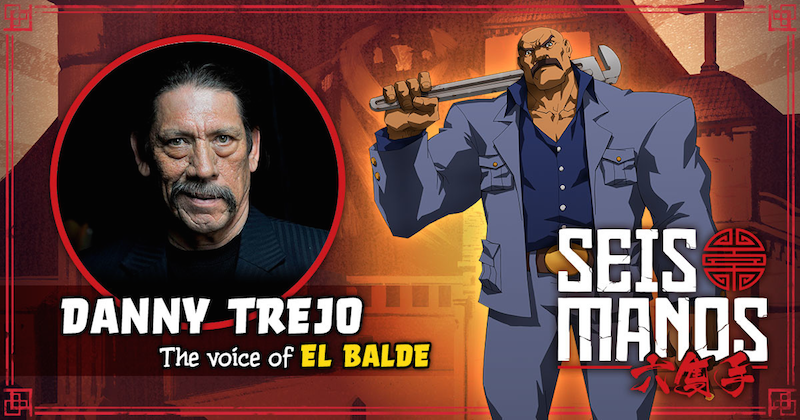 Oh Danny, I love you, even though everyone has you play the same character. | Image: CinePremiere

Still, the cast retains some depth. For instance, the three siblings have some particularly large moments after Chiu’s death. Each of them has a very human reaction to the loss of their father figure. Not only does this help us to get to know them, but it builds up our sympathy for the characters. Also, it outlines a lot of their vices and themes that show up again later. These themes, especially those regarding how they treat one another, grow in importance throughout the series.

Speaking of growth, we do see some change in these characters over time. Unfortunately, the growth presented might not balance out the disconnect from their starts. Much of the cast has this issue, though I felt Brister had special difficulty with this. Thankfully, there is time to better develop the characters. Future episodes can dig into each character’s past and motivations. Having an explanation for their behavior would help to overcome the initial lull. After all, you can only skate so far on fantastic fighting scenes. For SEIS MANOS to stay relevant, we need to love these characters.

On a related note, I took issue with how the women in this show are treated. Each woman in the series fits a different female archetype. Sometimes this isn’t bad. For example, Alejandra does it for me. She may be another witch stereotype, but I can’t help but love a confident woman holding her own in battle. Archetypes are so common, you can’t fault a series for using them as a starting line. However, this season had a tendency to remove the women in the show before they had a chance for further development. 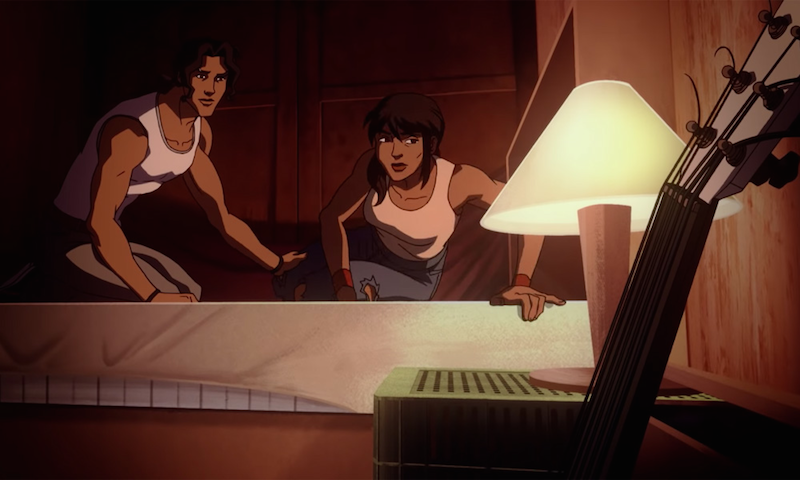 Case in point: fridging. Lina did not deserve to die. Her death served no purpose, and I would argue, hurt the show. Here’s what having Lina provided: A chance for us to see a tender side of Silencio that doesn’t involve ANY killing. He tends to show his care through removing problems, often violently. With Lina, we see someone who he can create something with — music. Lina shared past with Silencio. They were both brutalized in the same way. They found kinship with one another because of it. She was a self-determined woman who made her own decisions. She was vulnerable, strong, and represented the disabled community.

Killing her didn’t solve anything. It removed that window into Silencio’s soul. It removed the chance to have another important female character. Plus, it didn’t even have the chance to hurt Silencio. He found out at the end, so he barely moves past the shock stage. Unless it causes some lasting damage to Silencio later, it had no effect on the plot. And please note: Silencio BETTER be messed up about her next season. Not giving her a proper mourning will only make her fridging worse.

SEIS MANOS shakes up some of the mainstays in the anime community. Take the show’s theme “orphans make the best soldiers.” In so many stories, our protagonists are orphans. But the idea that their strength as warriors comes from being orphans? I don’t know if that applies to life, but it did make me rethink the power structure in NARUTO. At the end of SEIS MANOS, the kids take back the town and run it themselves. How real and tragic is that? It hits even harder than some of the cruelties in other anime. I don’t know how much of this theme is going to continue into the future. Whichever way, it’s complex, and it’s interesting.

SEIS MANOS, like many other shows, features a lot of orphans fighting each other. | Image: IMDb

Though themes like these connect back to other anime, SEIS MANOS is a bit of an anime outlier. Its Western influences make it stand out. There aren’t a lot of anime tropes or storytelling beats here. So, if you were hoping to catch an anime that feels like your typical shonen, you might be disappointed. If you want a diverse anime with real anime vibes, try MICHIKO AND HATCHIN’ or CANNON BUSTERS.

That being said, SEIS MANOS is still a great show! It just might be easier to compare to different media. It has Eastern themes, and an “animesque” appearance, but it doesn’t necessarily hit all the anime boxes. So I would hazard to compare it more to a darker AVATAR: THE LAST AIRBENDER or JACKIE CHAN ADVENTURES. Honestly, it’s actually a niche I didn’t even know I wanted. For me, watching SEIS MANOS became almost nostalgic, but with an adult flavor. It’s very much its own thing, but it’s such that it’s easy to enjoy.

Ultimately, SEIS MANOS really did it for me. I had been waiting to hear more on it since it was announced, and I was not disappointed. The show hooked me in with its action, its intrigue, and its complex themes. Plus, the characters really wormed their way into my heart. Now I crave seeing them happy and thriving, which is part of why I whined so much as part of my review. I’m ready and reeled in for another season.

What are you hoping for out of a season two? Will we know what happens to Brister? And what more will we learn about Chiu’s past? Let us know in the comments below what you’re waiting on for SEIS MANOS.