Seichi Junrei Magic: The Appreciation of Photorealism in Anime

What if I told you that you could travel to the world of anime? After all, our world is the model for most anime. The practice of visiting real places featured in anime is known as seichi junrei, or “holy land pilgrimage.” The term was originally rooted in ancient religious practices but has since been used in Japanese otaku circles to ironically liken anime locations to sacred sites. Nowadays, however, it is becoming a widespread, cultural phenomenon.

Recently, the Anime Tourism Association compiled a list of the top 88 anime pilgrimage sites for 2019. Shikoku’s 88 Temple Pilgrimage, Japan’s most prominent Buddhist pilgrimage route, inspired the concept. The list contains scenic areas that appear in popular series such as ANOHANA: THE FLOWER WE SAW THAT DAY and THE MELANCHOLY OF HARUHI SUZUMIYA. The Association itself was born out of a partnership between Kadokawa, Japan Airlines, and various travel agencies in 2016. Their aim is to attract tourists, from Japan as well as overseas, and revitalize aging locales on the verge of disappearing.

What started out as a subculture pursuit is steadily gaining traction as a global market. Anime fans, both casual and otaku, can enjoy the thrill of visiting real-world scenery from their favorite shows. Without further ado, let’s hop in and discover the world of seichi junrei!

From Obscure Hobby to Public Craze

People have forever visited spots featured in their favorite media, whether that be books, movies, or plays. Takeshi Okamoto, an associate professor at Nara Prefectural University, speculates that anime pilgrimages were conceived during the 1990s. Anime settings increasingly paralleled locales in the real world with backgrounds modeled after photos taken of real places. The slice-of-life genre was then taking shape and viewers naturally became interested in walking in the steps of their beloved characters.

But seichi junrei only became apparent as an ongoing fad during the mid-2000s when internet communities were starting to blossom. The internet allowed fans to seamlessly share their travel experiences and inform others about where to find these locations. The first pilgrimage to attract major media attention came in 2007 when fans of LUCKY STAR flocked to Kuki City of Saitama Prefecture. Its success opened the floodgate of anime tourism. Major pilgrimage sites that followed include K-ON!’s Toyosato and ANO HANA’s Chichibu. Local authorities and shopping streets took notice and began warmly catering to these out-of-town visitors. 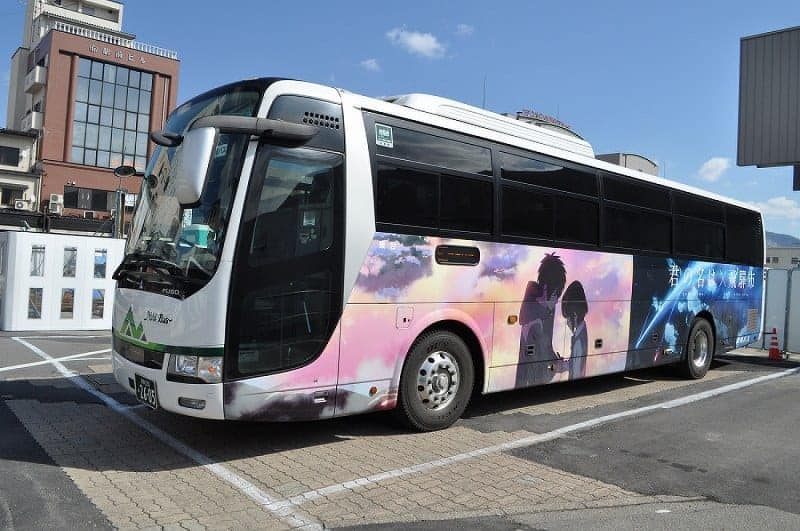 The Hida region welcomes YOUR NAME fans with this tour bus. | Image: The Mainichi

Anime pilgrimages finally broke into the mainstream in 2016 with YOUR NAME, the gripping body-swap fantasy that took the world by storm. The Hida region of Gifu prefecture drew droves of fans, totaling more than 1 million visitors in 2016, more visitors than they’d seen in years. Fans now pack the streets trying to track down and recreate exact scenes from the film. Anime pilgrimages had finally entered the public consciousness and thus the Anime Tourism Association formed to meet the demand.

Despite its current place in the mainstream, seichi junrei still has its hardcore community of fanatics. They hunt for specific, often very ordinary places: everyday streets, restaurants, train stations reproduced in anime in exquisite detail. Butaitanbou or literally “finding and visiting the stage,” entails hunting for literally any possible scene in an anime. Imagine if your local playground or laundromat appeared in an anime and people were scrambling to find them.

Butaitanbou enthusiasts are the pioneers who work out these locations for everyone else. The first elements to figure out are suburb and town names which are usually omitted or even altered in anime. These people will have to ascertain various clues, like landmarks and road signs, just from the background scenery. They use internet tools such as Google Street View to track down their targets.

Some incredible enthusiasts are able to identify places and produce side-by-side comparisons in 1-2 days after the episode airs. Indeed, butaitanbou is an art form: it requires careful instinct to compose and crop photographs to precisely match their appearance in an episode. These pioneers then usually post their findings on personal blogs for other, more amateur, fans to enjoy.

The Impact of Seichi Junrei on Local Communities

An influx of visitors can bolster a local economy, so many communities welcome these pilgrims. Shrines, towns, and even train companies are able to promote themselves and generate money from creating campaigns and selling anime merchandise. Some locales even offer augmented reality smartphone apps that fans can only access when arriving at the real-life scenery of an anime. For instance, Nanto in Toyama Prefecture developed an app that lets fans take photos of themselves next to anime characters while standing in pilgrimage spots.

Some fans take the religious connotations of seichi junrei to heart. They display their devotional behavior by leaving ema, or wooden prayer plaques, at shrines inscribed with images of their anime idols. A famous example is Kanda Shrine near Akihabara, now mainly known for its various appearances in LOVE LIVE!. The shrine has received so much traffic since LOVE LIVE! aired, that they regularly sponsor the franchise’s events and even sell ema featuring drawings of your favorite LOVE LIVE! characters. Some fans even leave their own drawings on the blank side of the ema to add their own prayers! 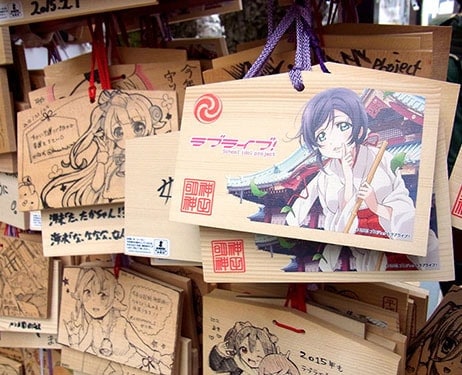 Some anime studios even collaborate with locales during the pre-planning process of creating an anime. Local areas are now vying to secure promotional deals with anime producers. Even so, it is not so easy to become a pilgrimage spot. Many local governments dream of the revitalization an anime project can bring, but only a lucky few locations are chosen by creators and then their fans. A series doesn’t always showcase the areas chosen as hoped either. Some producers of anime still prioritize their own artistic urges over the wishes of local representatives.

The Realization of a Fictional Festival

Kanazawa City’s Bonbori (lantern) Festival is an interesting case in which seichi junrei has shaped local tradition. The whole festival is an anime fabrication: a non-existent historical ritual imagined by artists seven years ago that has now become a real happening. The festival first appeared in HANASAKU IROHA, an anime by P.A. Works, a studio in the nearby city of Nanto. In October 2011, the year the series broadcasted, the locals re-enacted the festival.

HANASAKU IROHA’s setting is modeled after a former ryokan inn at Yuwaku hot springs in Kanazawa, Ishikawa Prefecture. It portrays the personal journeys of the ryokan owner’s granddaughter and her friends. The series depicts a fictional event in the hot springs district called the Bonbori Festival. According to P.A. Works producer Nobuhiro Kikuchi, officials of Kanazawa City requested the studio to create an anime and a festival to bring back life into the region after suffering damage from torrential rains in 2008. Since then, the event has taken place every year and is becoming a permanent part of the area’s tradition.

The current occasion, however, is retreating from its anime roots to widen its appeal. In the beginning, they invited voice actors and cosplayers. But more recently, they’ve invited traditional artisans and have seen a rise in the number of families and people from overseas attending the festival. Like so many neglected hinterlands of Japan, Kanazawa is rich with culture and stories. Anime tourism may be one way to save them and fulfill their potential.

There is something magical about visiting the places that appear in your favorite anime. Seichi junrei is the experience of reality and fiction intersecting. By visiting the real-life settings characters spend time in, fans can develop a closer bond with the series they love. But it can be difficult to find such locations in the first place. As with most research endeavors, the internet is the most efficient and comprehensive source of information. A simple online search can yield relevant and trusted details.

English-language material about visiting real-life settings in anime is limited, but fortunately we have a couple recommendations in store for you. One place to start is Mike Hattsu’s blog, where he writes about various pilgrimage sites he’s visited, along with maps and side-by-side comparisons with screenshots and photos. Another prominent seichi junrei enthusiast, Michael Vito, has a blog that regularly features reports about various discoveries from Japanese butaitanbou pioneers.

Have you ever participated in a seichi junrei? Do you want to participate in one? Which real anime setting would you like to visit the most? Let us know in the comments below!

Why We Need An OURAN HIGH SCHOOL HOST CLUB Reboot

by Melissa Padilla on October 14, 2019
It's been thirteen years since shojo classic OURAN HIGH SCHOOL HOST CLUB graced the screen. It's time to reboot the Host Club and finally complete the iconic anime.

It’s Time to Admit that DRAGON BALL SUPER is Terrible

by Jay Gibbs on September 9, 2019
Energy blasts, explosive transformations, and intense combat are the quintessential elements of DRAGON BALL. With its newest anime series, those visual elements are there, but basic things like animation quality, plot, and logical consistency have diminished considerably. Read on to explore these deficiencies and how they affect the classic show.

Why We Need Modern Anime Mentors

by Melissa Padilla on June 5, 2019
Recently, some of the most popular anime feature mentors who fulfill a more emotional role than a true teaching one. How are people responding to these changes, and what does it mean for our favorite anime?

4 Reasons Why FRUITS BASKET is a Top Spring Anime!

by Jay Gibbs on May 19, 2019
FRUITS BASKET is an emotional storyline and one of the best anime this Spring. Check out why we think it's so great!