Bkub Okawa’s bizarre, crude, and over-the-top webcomic POP TEAM EPIC is coming to manga form from Vertical Comics. But that’s not all! The POP TEAM EPIC Season 1 anime, which was released a few months ago, will also be available on blu-ray October 2nd. In honor of all this excitement, Funimation declared October 1st the (un)official POP TEAM EPIC Day! Kinokuniya NY is hosting the party at 6:00 pm on October 1st, 2018. 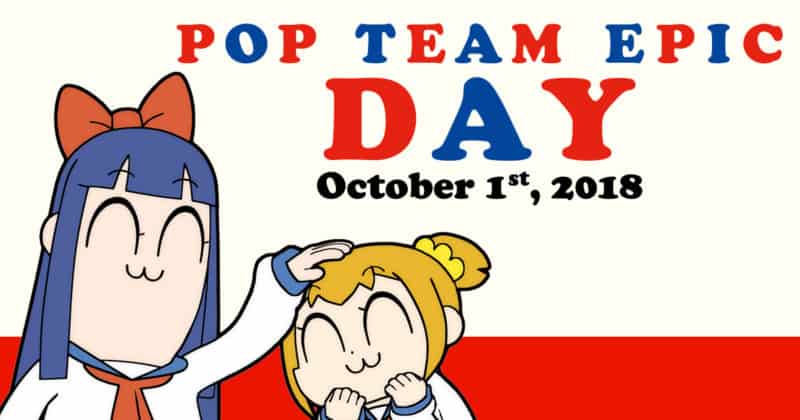 Viewers can’t quite make sense of POP TEAM EPIC. Perhaps that’s the secret. POP TEAM EPIC began as a surrealist four-panel (or 4-koma) webcomic that quickly became a manga series. As a result of the manga’s hyperbolic humor and pop culture parodies, the series has attained cult status. Okawa’s heroines, preteens Popuko and Pipimi, create a variety show of bizarre escapades throughout the series. Indeed, the manga and now anime take on cultural references at random. POP TEAM EPIC challenges tropes in anime and completely disregards expectations about acceptable humor. The series is simply riotously unpredictable. Ultimately, its irreverence makes the series exciting, strange, and humorous. 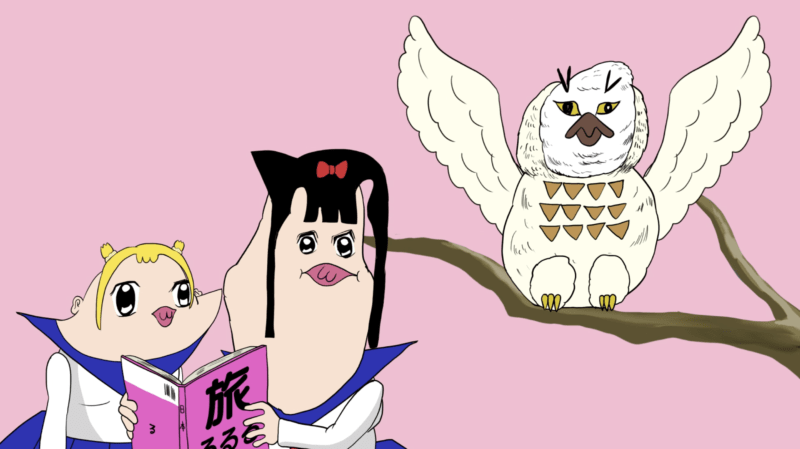 Matching the writing, the animation is a pastiche of strange imagery and styles. As one ComicsVerse AniManga writer states: “Some of the scenes are joyfully cringe-worthy, and the art is generally hilarious to look at.” Thus, if you’re ready for the strange, bizarre, postmodern, avant-garde, then it’s time to celebrate POP TEAM EPIC Day.

But why attend  Kinokuniya’s POP TEAM EPIC Day, you ask? Well, it’s only your chance to share in the excitement of Vertical Comic’s manga release with other POP TEAM EPIC enthusiasts! Kinokuniya NY’s event on October 1st will include super cool POP TEAM EPIC masks for attendees. Additionally, you can have your POP TEAM EPIC photo-op with Popuko and Pipimi standees. You can also purchase early copies of the home video and manga! Plus, there will be a POP TEAM EPIC panel with presenters from Funimation and Vertical Comics.

There, you can discuss the absurd, the random, and the logic-defying anime! Revel in the mind-boggling success of POP TEAM EPIC and the forthcoming release of POP TEAM EPIC Season 1 on home video. POP TEAM EPIC Day will be held at Kinokuniya NY, 2nd Floor on October 1st from 6-7pm. Don’t worry! If you can’t make it to the event, you can pre-order POP TEAM EPIC here.

Anime Production 101: How Anime is Made

by Kristine Don on January 1, 2018
Anime production is a messy affair. We break down how anime is made in Japan with a Beginner's Guide to Anime Production. Now, let's get started.