Why We Need An OURAN HIGH SCHOOL HOST CLUB Reboot

OURAN HIGH SCHOOL HOST CLUB deserves a remake. The 2006 anime, while excellent, aired before the end of the series. As a result, it was incapable of completing the manga’s plotline. Many fans even felt that the show ended on a cliffhanger, uncertain as to the fates of the characters. Now that the entire series has long finished, it’s the perfect time to revisit this iconic romantic comedy and give it the multi-season reboot it deserves.

OURAN HIGH SCHOOL HOST CLUB tells the story of high school freshman Haruhi Fujioka, who attends the elite Ouran high school on scholarship. After a mishap in which she destroyed an expensive vase, Haruhi is recruited into the Ouran high school Host Club. Working off her debt by pretending to be a male host, Haruhi has to deal with the chaotic whims of the rich and eccentric club members.

The series was one of the most popular in the 2000s, with its iconic theme and hilarious writing. The manga, created by Bisco Hatori, ran from 2002 to 2010 and spanned 18 volumes. While there was a live-action drama released in 2011, the anime still remains the most well-known format of the familiar story.

No matter how much time has passed, OURAN still has so much to offer. Even today, one of the most-searched questions on the series is “Will there be a season 2 of OURAN HIGH SCHOOL HOST CLUB?” Let’s drop the “season two” and restart all together! We can experience the magic all over again, but this time with a complete story built on the new things we missed before. Let’s explore some of the fantastic things we’d get to experience a complete OURAN remake.

Along with getting to see more of our favorite characters, a reboot would give us characters we didn’t even know we wanted. The original anime kept some of the wider cast, like Honey’s brother Chika and Tamaki’s dad, but skipped plenty of others. For instance, Mori’s brother Satoshi usually accompanies Chika everywhere he goes, but he didn’t appear in the anime. With a reboot, we would meet the family of the entire Host Club. While it might not seem like a big deal, some family members make a strong impression. For example, the Hitachiin twins’ grandmother is a motorcycling badass with flowers for hair. Even the more-normal family members help showcase the club members’ home lives. 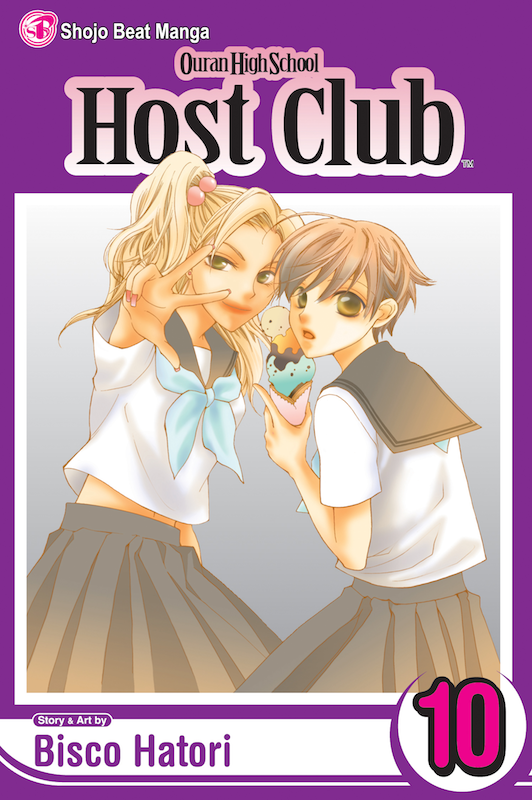 For me, the most important inclusion in this reboot would be the leading women of OURAN. Some of the female characters we missed in the anime are just fun, like Honey’s future wife, Reiko Kanazuki. The two have a unique relationship built on accepting each others’ vast differences. On the other hand, certain women indispensable to the manga’s plot never appeared in the anime. The Suoh lawyer Yuko Kosaka plays a large role in Tamaki’s family life, and eventually becomes a teacher figure for Haruhi. A remake would give these women and others a chance to show their true colors in the series.

The character I most want to see the most is Mei, daughter of inn-owner Musuzu. She’s a more relatable voice than that of the rich society dominating OURAN. Plus, her outspoken, choleric personality provides the nudge Haruhi needs to start questioning what she truly wants. Overall, I love the valuable friendship she provides for Haruhi.

Including the Bonus Chapters

I think one of the greatest things an OURAN reboot could give us is the content from the manga extras. The concurrent side stories are just so, so cute. Many of them involve characters with minimal dialogue or appearances, like Mori, or club members’ families. They were usually played for laughs, and often featured Mori’s pet Tanuki, Pome, and pet chick, Piyo! While it could potentially be hard to place these shorts in the plot of a remke, it’s worth trying. A huge part of OURAN’s appeal is its humor, and adding to episodes with silly bits from the manga would be staying true to OURAN’s spirit.

Among the bonus stories are some outside the current timeline. Despite their timing, these extras often carried some plot significance: 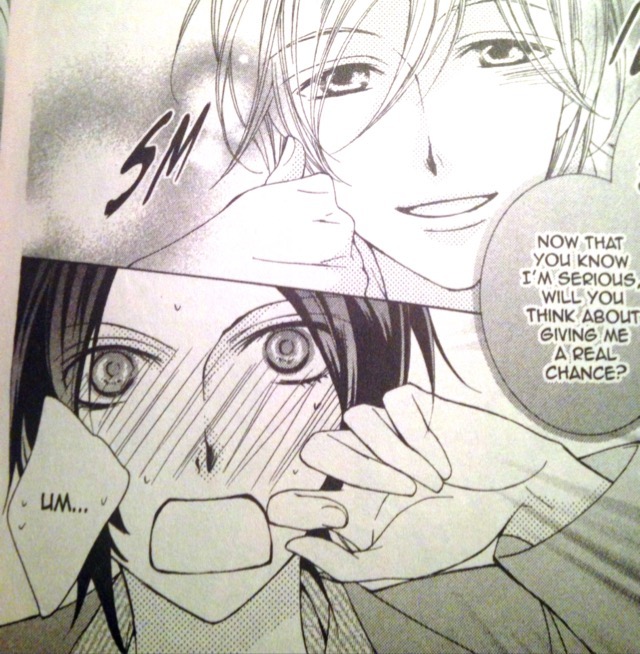 Ryoji and Kotoko’s excellent relationship dynamic was one of many in this manga. | Image: OURAN HIGH SCHOOL HOST CLUB Vol. 16.

OURAN’s prologue chapters serve to provide context for the series. My favorite example of this is in the love story of Haruhi’s parents. For much of the series, we only have Haruhi and Ranka’s stories to get a sense of Kotoko’s personality. The prologue chapter lets you see it. For one, Ranka and Kotoko were an adorable couple. For another, it becomes much easier to understand Haruhi wanting to be a lawyer when we get to know her mother. Much of the “coolness” Haruhi and Ranka love in Kotoko comes from Kotoko’s sense of justice. In the manga, we get to see that in action. Anime fans should get to experience that, too.

Epilogues are great because they tie up loose ends while feeding the imagination. The time gaps and future happenings in epilogues give rise to new ideas. In the case of OURAN, a remake could not only show the epilogue chapters, but even expand on them. Though some OURAN epilogues were full chapters, others were just drawings with descriptions. Having an epilogue clip show episode would be a great way to give everyone’s stories their own moment. Plus, adding motion and sound could give additional context we never had before. Wouldn’t it be great to meet the twins’ younger sister, or see clips of Honey’s wedding? I want to argue it will complete the story. But honestly, I just really want to see it. 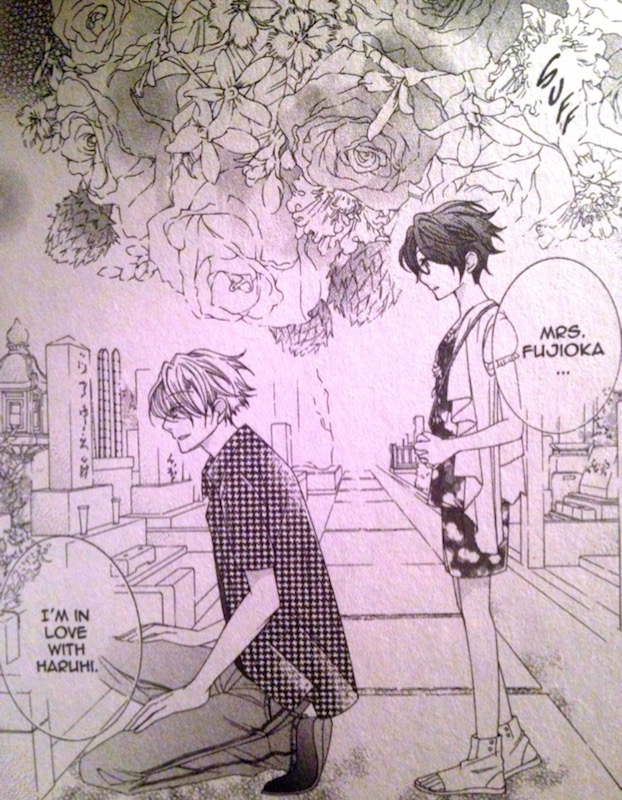 When Haruhi and Tamaki finally get together in the manga, they do it right. | Image: OURAN HIGH SCHOOL HOST CLUB Vol. 18

OURAN may have been a romantic comedy, but at first, I wanted more comedy than romance. With Tamaki as the obvious male protagonist, I prayed he wouldn’t end up with Haruhi. I thought he was an idiot — irredeemably so. Plus, Haruhi showed minimal interest in romance at all. Why would I root for them to get together if they seemed so incompatable?

I won’t make the bold claim that the OURAN manga changed my preferred ships. However, it does provide the character development necessary to make a romance reasonable. Through the manga, we understand that Haruhi doesn’t intentionally avoid love. She simply never gave it much thought. And, with that inexperience, she had a hard time recognizing her own emotions. It makes sense — ignoring aspects of life can make those things harder to recognize when they appear. Unknown to Haruhi, her feelings had been growing all along. When she finally understands that, we see her behavior transform. It’s not out of character for her to flush or bluster because it wasn’t something she’d ever considered before. Suddenly the concept of her accepting love didn’t sound so out of place.

For Tamaki, his interactions with others were crucial for me to believe he deserved Haruhi. First, slow revelations into his childhood and young adulthood build sympathy. With this context, we see that all his (sometimes strange) actions come from a place of tenderness and devotion. His history with Kyoya, especially, played a large role in my accepting Tamaki. Learning why Kyoya loves his friend shows why Tamaki deserves the audience’s love. And, in turn, why he can deserve Haruhi. A remake would be a chance for the anime to give Tamaki a chance to redeem himself in the eyes of skeptics like myself. 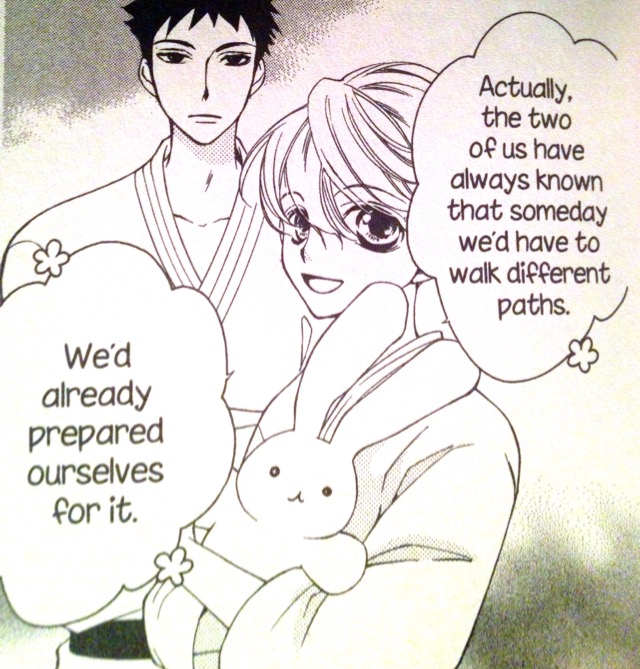 In the manga, arcs focused on character growth. We had a taste of that in the anime, with episodes dedicated to each club member. Unfortunately, there’s only so much you can fit into a one-season anime. Without the entire plot, the characters in the host club never fully change. They can only make steps. In the anime, we miss Mori having to fully let go of Honey so they can graduate. We miss Kaoru forcibly splitting himself from Hikaru, and both of their resulting evolution. Or what about Kyoya’s cool facade pushed to the limit in his passion to save his best friend? Or the conclusion of Tamaki’s family conflict? And of course, we miss Haruhi learning how to reach for what she wants.

Do you think that we should remake OURAN HIGH SCHOOL HOST CLUB into a new anime? What do you wish you could see on screen? Share your ideas in the comments below!