by Jon Ellis on September 18, 2018
Manga
5
0
previous article
Being an Adult is Hard in THE DELINQUENT HOUSEWIFE Vol. 1
next article
Does FLAVORS OF YOUTH Live Up to YOUR NAME?
Contents

To quote Syndrome from Disney’s The Incredibles, “When everyone’s super, no one will be.” MY HERO ACADEMIA VIGILANTES Vol. 1 by Hideyuki Furuhashi and Betten Court proves that statement right. While there are some stand-out children who grow up to become great heroes, most people with quirks are just that, people with quirks. Koichi Haimawari is one such person.

Armed with the ability to slide friction-less on any surface, Koichi just can’t compete in a saturated industry of professional superheroes. Instead, he works part-time at a convenience store while attending a local college. It’s a modest life for a modest kid, but when Koichi gets tired of the constant monotony, he dons his signature mask and hoodie and becomes…Nice Guy! An unlicensed hero who gives lost people directions and picks up trash that he finds on the sidewalk! That is, at least, until he comes across Knuckleduster. Knuckleduster is an older vigilante who takes his crime-fighting a bit more seriously. Despite lacking powers, he works tirelessly to defend those in need. Together, the duo looks to clean the streets of Tokyo when the licensed pros can’t.

Part of the reason we love MY HERO ACADEMIA is its hopeful tone. No matter how dark the series gets, justice will prevail thanks to hard work and a positive attitude. The story revolves around incredibly gifted students attending the most prestigious hero course in Japan. 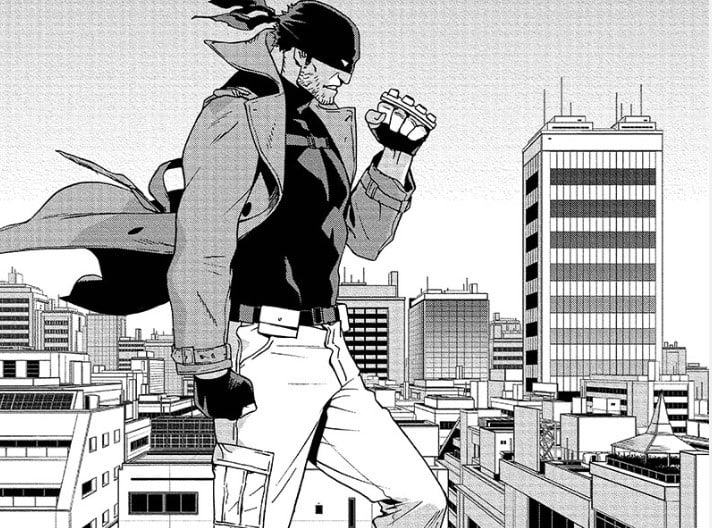 Knuckleduster in all his glory.| Image: Viz Media

When compared to its original counterpart, MY HERO ACADEMIA VIGILANTES is far less hopeful. Instead of the most promising students in Japan, the story revolves around incredibly average people. Koichi and Knuckleduster have each graduated from high school, missing their chance to attend UA.

Koichi attends a local college and Knuckleduster well… I’m not entirely sure what he does. Suffice it to say, these characters view their hero work as a hobby more than anything else. MY HERO ACADEMIA VIGILANTES thrives in its ability to maintain a shared superhero universe while celebrating the mundane parts of day-to-day life. What’s more, writer Hideyuki Furuhashi isn’t afraid to write about some of the more seedy parts of Japan’s city life.

In the first volume, the story revolves around an illegal drug trade and even includes an attempted rape. While the primary series can take itself seriously, even the villains in MY HERO ACADEMIA are fighting to defend some moral stance. Not everything happens for a reason in VIGILANTES, sometimes people just do bad things.  This may be a bitter pill to swallow for fans of the flagship series, however, MY HERO ACADEMIA VIGILANTES’ willingness to go a bit darker than its predecessor shows how comfortable the creative staff is making this story their own.

We Aren’t in UA Anymore

Furuhashi treats his characters much like he treats his city’s setting. Koichi and Knuckleduster often have the best intentions when fighting crime, but they are still breaking the law. By not getting their provisional licenses, the duo has shrugged the responsibly that heroes like Endeavor and All Might took when attending UA. These imperfections do well to remind us that this isn’t a story about Japan’s best heroes. It’s about the people left over, making MY HERO ACADEMIA VIGILANTES feel incredibly fresh.

In the first installment of any story, its good to keep the reader guessing. Each main character in MY HERO ACADEMIA VIGILANTES is shrouded in mystery, keeping me wanting more. Everyone has a reason for becoming a vigilante, we just might not know it yet. In fact, it would have been nice to have received a bit more background on the characters in the first volume, but Furuhashi doesn’t seem ready to divulge that information as of yet. Oh well, we’ll just have to wait until the next volume!

Easy on the Eyes

Betten Court showed his artistic versatility in the first volume of MY HERO ACADEMIA VIGILANTES. For the most part, the art in the book reflects the lighthearted tone of the story. I can’t help but crack a smile whenever I see Koichi slide by, using his eccentric quirk. 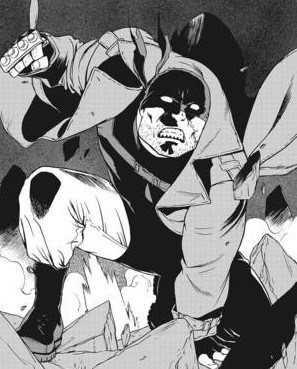 That said, Court is able to give the story a more serious tone by adding additional details to the action scenes. The art in MY HERO ACADEMIA VIGILANTES is a bit cleaner than that of the main series, but it still feels cohesive. The shading does well to uphold the high standard of art and the letters never clash with Betten Court’s style.

If you want more MY HERO ACADEMIA, look no further. MY HERO ACADEMIA VIGILANTES delivers a plot that matches the original story’s fictional world while exploring new characters and ideas. The art is phenomenal, the action is great, and the characters are fun to follow, although I wish I knew more about them. I can’t wait to see what the creators have in store for us in the next volume.

MY HERO ACADEMIA VIGILANTES Vol. 2 comes out October 2. If you’re interested, you can find it on Amazon, Viz Media, & wherever manga is sold.