MY HERO ACADEMIA Episode 62 Review: The Next Chapter Begins!

This week’s episode, like last week, functioned as a thematic bridge between this season and the events of Season 4. In that regard, “A Season for Encounters” was quite strong. A lot of fans tend to broadly prefer the sort of “throw all the money into it” action of last week. But, as with every anime, that kind of action is only good because of slower, deeper episodes. Taking the time to properly develop and contextualize society makes for a better story. Especially considering how MY HERO ACADEMIA creates not just a world but a culture, this is big. Every little bit of detail is important. Manga readers can confirm that every aspect of this transitional segments develops useful links that may seem irrelevant at first. But, even if fans don’t read the manga, MY HERO ACADEMIA has made one thing clear: everything we see on screen matters.

Even so, the episode felt a bit dragging at times, mostly toward the beginning. I don’t doubt the usefulness of the content, but that doesn’t mean it wasn’t stretched a bit thin. Given the pace and extent of the source material before the next arc, this likely isn’t a problem that MY HERO ACADEMIA could have solved without filler. Even so, I would say this episode likely would have felt a bit better if it were 15 minutes long rather than full length.

The scenes toward the beginning of the episode involving the villain Twice were fantastic. Seeing as viewers hadn’t yet seen what the quirky villain looked like, the scene was vague. This vagueness of his identity makes it easy to zero in on the content of his monologue. Unsurprisingly, this was a scene radically enhanced by visuals and sound. Voice acting takes things farther as emotions and accents hit the dialogue. Movement implies the day-to-day feeling of the monologue content. The constant laying of sounds like news stories with inner thoughts and environmental noises makes for a full picture. This was one simple way that the anime shined.

Even more, the episode elucidated interesting foundations for villains. Like heroes, they’re reacting to All Might’s retirement. They’re forming groups the hero students to amass power. All of this to fill the gap that All Might left, either by taking advantage of or accounting for his departure. It also established the feelings of helplessness that make people villains in the first place. 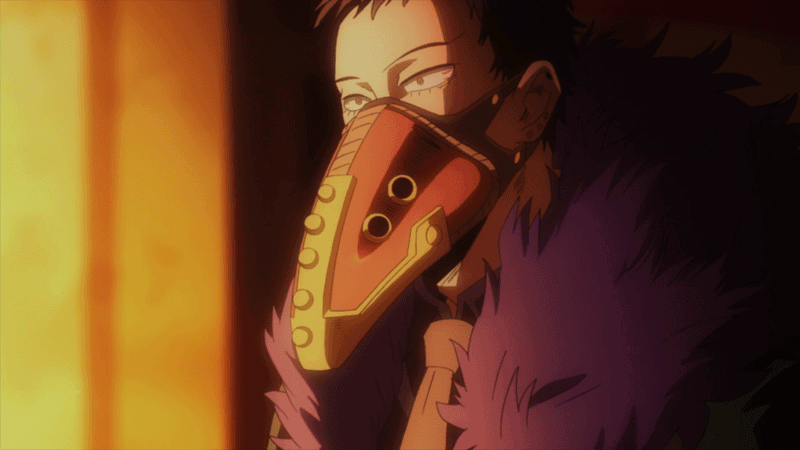 Villain recruitment is one of the coolest parts of the series. | Image: Crunchyroll

Part of what makes villains like Toga, Mustard, and Twice appealing is how they describe their own hopelessness within villainy. In MY HERO ACADEMIA, the entire world has Quirks. To have superpowers in a world of superheroes but not be…super likely carries challenges. This makes the fights between heroes and villains one not only of motivations and power but of place in society. Villains form groups to recreate the parts of society they feel excluded from. That organic conception of villainy is exceptional and something unique to MY HERO ACADEMIA. Given the foreshadowing toward the next arc and revelation of the newest villain, Overhaul, we’re certain to see that struggle blossom in combat.

This week we finally got to see the Big Three of UA Academia. These three students, without spoiling anything, are strong. Extremely strong. We’ve already seen one of them has strange powers related to intangibility. It’s unclear how they work, but one thing is easily predictable. If they’re UA’s strongest, they likely have great Quirks and are quite good at utilizing them. Even though the one we’ve seen looks more like a FALLOUT mascot than an anime character, he’s probably pretty good if he’s best at UA. 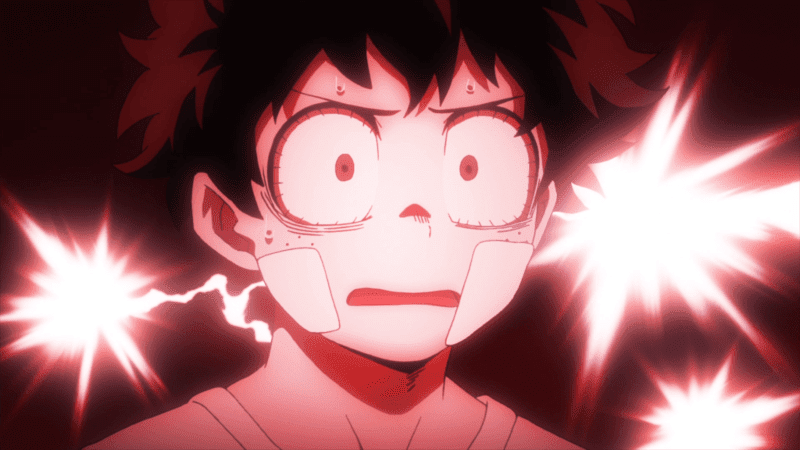 The exams are over, and class is more important than ever. | Image: Crunchyroll

But more than that, their involvement signals that other classes will be involved in future arcs. By slowly introducing the vocational component of UA’s curriculum, we’re slowly learning more about every stage of being a hero. Given the deficit left by All Might, it’s clear that good heroes are urgently needed. If that means that our first years will come more into contact with upperclassmen, that’s a good thing. We’ve already seen that being a true hero isn’t always a matter of one’s age or power level. The class below 1-A had a 100% pass rate despite having weaker Quirks. Our budding heroes have challenges of many a kind. Episode 62 did well to frame how each character individualizes that struggle within a common context. That is, each person is pushing for the same goal but along varying routes and paths.

Class is in Session in MY HERO ACADEMIA!

As the second cour and third season of MY HERO ACADEMIA slowly comes to a close, we’re getting some strong setup. Arcs are always paced such that every season leaves us hyped for the next. This one isn’t even over, and most fans are already eagerly awaiting the next. In the meantime, we’re sure to meet great characters in the next few episodes. If this week’s preview was any indication, there will be quite a few exhibition fights to come too. The rival battle between Midoriya and Bakugo set a new standard for animation in MY HERO ACADEMIA. If Season 4 has even a single fight like that, I will be forever satisfied.

What did you think of this week’s episode and the new characters? Let us know in the comments!