Why We Need Modern Anime Mentors

Adulthood sucks. It’s complicated, it’s confusing, and it’s disappointingly easy to feel directionless. No guidebook or Pinterest quote could be long enough to apply to every situation in adult life. At times like these, we look to the people around us. Whether experienced or not, some people have a knack for figuring out the best solution to our problems. Anime mentors are not those kinds of people.

Throughout shonen anime, mentor figures exist to guide young protagonists in fighting or using their powers. A character might have one mentor or many. Often, these mentors are caring but aloof and functioned mostly to signal when the protagonist surpassed the teacher. Sure, they might be able to teach you a technique. But teachers like these have some emotional distance to them, especially when they don’t stick around very long. Why would they bother after their hero learns the teacher’s technique, surpasses the teacher’s strength, or when the teacher could die to spur on the hero’s journey? It’s not exactly a touchy-feely way to treat your protagonists and their mentors.

Yet, that’s the hole that recent anime seems to fill. Shows like MY HERO ACADEMIA and MOB PSYCHO 100 found huge fan responses to the relationship between the protagonists and their respective mentors. There’s something here that hasn’t been explored before in character relationships. And it’s providing something many fans didn’t even realize they needed.

The “found family,” or “Family of Choice” trope is arguably one of the most popular themes in anime. People with stressful or absent family lives build a chosen family in their friends. This trope plays a huge role in any anime with a team or friend group as the main cast. For example, think back to Team 7 in NARUTO, the Straw Hats in ONE PIECE, and the guild in FAIRY TAIL.

Currently, some anime are changing the traditional team-as-family format. Unlike their predecessors, these anime zooms in on the founding family relationship between mentor and student. In MY HERO ACADEMIA, we clearly see this familial tie. Midoriya fits the qualifications for absent family life. Though his mother is supportive and caring, we’ve never even seen his father. Instead, the man we see impacting him from childhood is All Might. When the two meet, All Might select Midoriya as his successor and take him under his wing. Even Todoroki asks Midoriya if he’s All Might’s secret child — that’s the relationship the two give off. 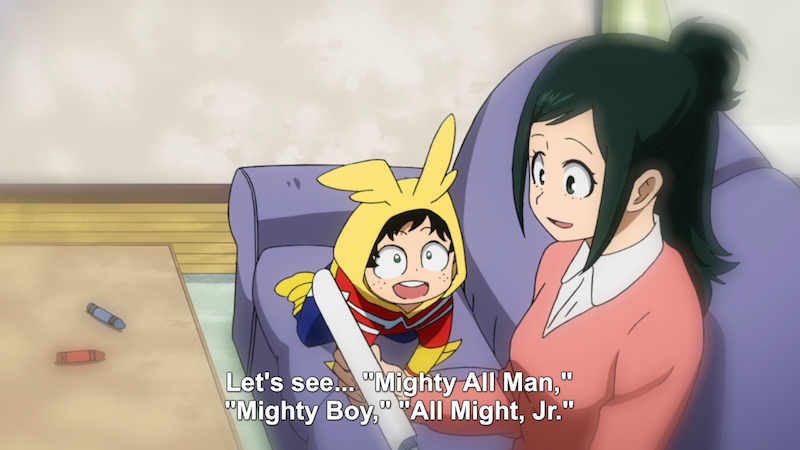 Less directly paternal is the relationship between Mob and Reigen in MOB PSYCHO 100. Mob’s parents are both around, so you might think he wouldn’t need Reigen. However, Mob’s parents didn’t understand his problems as a child. This created a need that became filled by Reigen. What brings the found family trope to their interactions is Reigen’s guidance. While one could consider Reigen irresponsible in some ways, he will make the effort to show up when Mob needs him. Plus, Reigen’s advice almost always aims at making things easier and safer for Mob.

ONE PUNCH MAN Season 2 Trailer has Finally Been Released

Guess I’ve Adopted All These Kids

Even if anime is centering on the mentor-protagonist relationship, don’t discount supporting casts. The mentors certainly don’t. Rather than focusing on only the main character, today’s mentors are open-hearted to their wards’ loved ones. With All Might, there isn’t much choice. Midoriya’s classmates are his students, and he watches over them as he should.

But All Might even connect to Midoriya’s mother and goes the extra mile to ensure her comfort. For Reigen, he meets Ritsu and Teru while looking to take care of Mob. He grows more familiar with the kids as they wind up in new situations. Both All Might and Reigen do their best to be good role models for every person around them. 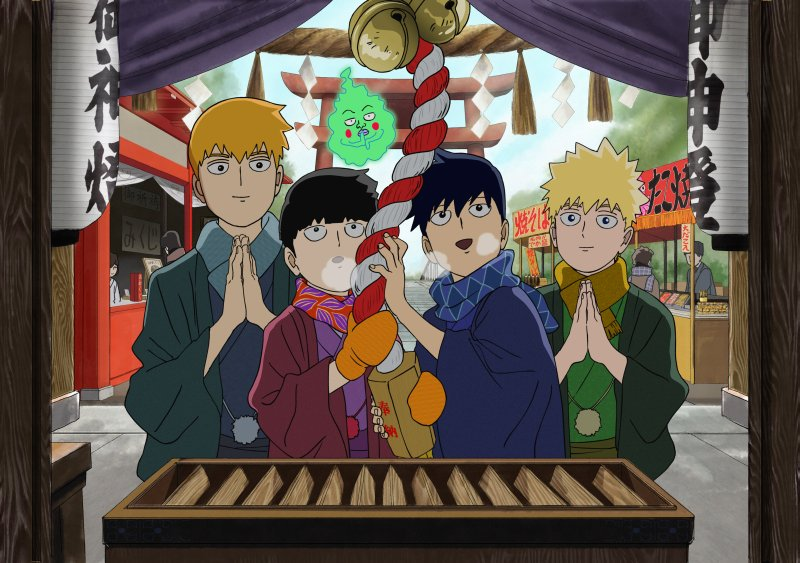 Reigen takes the kids out for New Years. | Image: Twitter

People like this strong protective instinct. As viewers, we are meant to invest in the kids. They’re our main characters. So, when an adult shows how much they care about those kids, it feels right. It’s how one might think an adult should act toward those they are responsible for. Their empathy cements them as good people. It doesn’t matter how our adults treat others. We already understand that they have a sense of who’s really important.

I affectionately call this the Gordon Ramsey effect. The iconic celebrity chef takes time to encourage children but humiliates adult professionals. He, like Reigen and All Might, would never intentionally shame a child. And, if they somehow do hurt those kids, they recognize those faults and improve themselves. In a way, they have a concept of true responsibility—being accountable, present, and sincerely focused on their group’s well-being.

While our new mentors are accountable role models, they are by no means perfect. And that’s how we like them. After all, it’s hard to relate to “flawless” characters. In anime, power-scaling problems, shallow emotional depth, and predictable plot lines can kill character humanity. Thankfully, our new mentors are remarkably human. Both characters have disadvantages in their series’ preferred combat form. Reigen has no psychic powers and All Might have severe injuries. However, that isn’t their most important feature.

Rather, All Might struggle with high expectations of himself and resulting in self-criticism. Both he and Midoriya share this trait, and it’s what drives them to make most of their decisions — good or bad. On the other hand, Reigen is not thoughtful. He inadvertently hurts people or takes advantage of them. 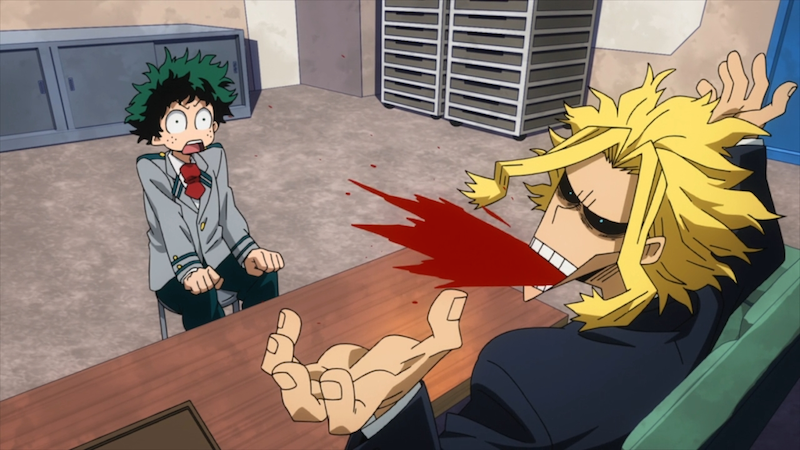 Izuku might be a little traumatized in more ways than one. | Image: Anime Evo

These flaws impact the storyline by affecting how the mentors interact with their protagonists. All Might’s drive is in making Midoriya a better hero than him. Reigen’s self-serving attitude makes him a skilled manipulator, which can both aid and hurt the main cast. That’s the benefit.

These flaws create contradictions. Ultimately, that’s what makes these anime more interesting and realistic. Traditional mentor characters’ flaws often fail to contribute to characterization. For example, the creator might add “personality” and by slapping the label of “pervert” on their mentor. Alternatively, the mentors’ characterization only comes in the backstory, the responsibility of which passes to their ward after death.

As such, Reigen and All Might feel more real than other mentors. They provide a personality with their care and their knowledge. In some ways, having a mentor who fails and redeems themselves has a more emotional impact than one who is always right.

I Need a Hero

People very rarely pick their parents. Given that, how do you imagine an ideal parent? For many, I think it would be someone supportive and dependable. Perhaps funny, or personable. They wouldn’t have to be perfect. But they would be present, especially when their child feels lost or uncertain. 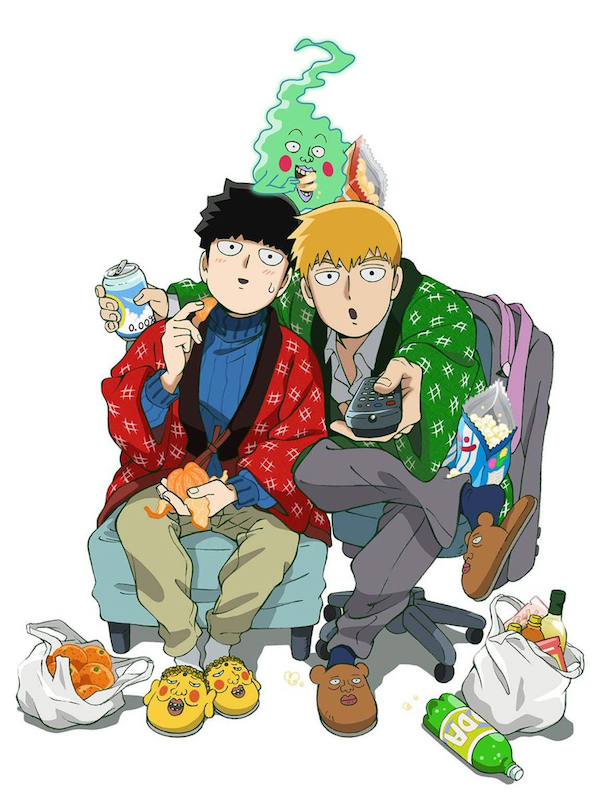 Most of today’s anime fans are Millennials and Gen Z. Relatively young, people of these generations are trying to find their way in the world. Among all the chaos, it’s easy to feel unconfident. As cliché as it seems, it parallels the growth of anime protagonists. The creators know that. After all, both ONE, creator of MOB PSYCHO, and Kohei Horikoshi, creator of MY HERO ACADEMIA, are Millennials too. They share in the viewers’ generational culture. Therefore, those of us in the age group might find additional meaning in their work. Part of that is empathizing with their characters.

When you see someone else caring for the protagonist, you feel that too. There is catharsis in someone who will stand by the protagonist no matter what. They don’t have to “save” the lead character. The protagonist needs to grow. Still, the main characters have that support. In turn, real people are also responsible for themselves. Likewise, I think we crave the same companionship, emotional support, and guidance. In effect, we get that encouragement and comfort vicariously through our characters.

You can find an emotionally present mentor in more and more sources of media. So many shows contain hints of a stronger, more familial mentor relationship. Fans reflect that change through the aspects of their shows and the fan content they create. Reigen and All Might have ushered in a new age of guidance. Where are we likely to see it next?

Featured Image from Wrong Every Time.

by Jay Gibbs on August 19, 2018
MY HERO ACADEMIA Episode 57 "Rescue Exercises" brought a great platform for steady characterization and unique action. Check out our review!

by Jay Gibbs on July 28, 2018
Midoriya takes on a strange new foe this week! Check out our recap of this week's episode of MY HERO ACADEMIA!

by Jay Gibbs on July 7, 2018
While there isn't an episode of MY HERO ACADEMIA this week, there's still fresh content. Check out the exciting new trailer for Season 3's second half!

by Jay Gibbs on June 30, 2018
MY HERO ACADEMIA even makes its transition episodes amazing. Check out our analysis of Episode 51 and its fresh characterization!

MY HERO ACADEMIA Class 1-A: Ranked

by Jay Gibbs on June 21, 2018
MY HERO ACADEMIA has a lot of characters and a lot of action. Check out our ranking of the heroes in training based on combat strength, adaptability, and heroism!

by Jay Gibbs on May 19, 2018
MY HERO ACADEMIA has done it once again. In one of the best episodes of Season 3, episode 45 "What a Twist!" combines intense characterization with amazing sound.