DR. STONE is Getting An Anime Series!

by Jay Gibbs on November 15, 2018
21
0
previous article
Legendary to Develop MY HERO ACADEMIA Live-Action Movie
next article
How Anime Uses Nature Scenes to Manipulate Us
Contents

This groundbreaking sci-fi shonen manga series is one of the most recent to get its own anime! Originally, serialized by Shonen Jump, DR. STONE joined a long line of fantasy-style shonen series from the beginning. As many fans know, these “shonen” series are mainly targeted at a viewing audience of young men in their teens and twenties. In terms of the stories themselves, this means that the vast majority of series tend to have a combative focus. But, it also means that focus on things beyond visually appealing fights can diminish somewhat. After all, when the viewing audience just wants to see energy beams or flurries of fists, plot is often secondary. However, DR. STONE carved out a niche by integrating rock solid characterization and concept into a story with plenty of shonen action. 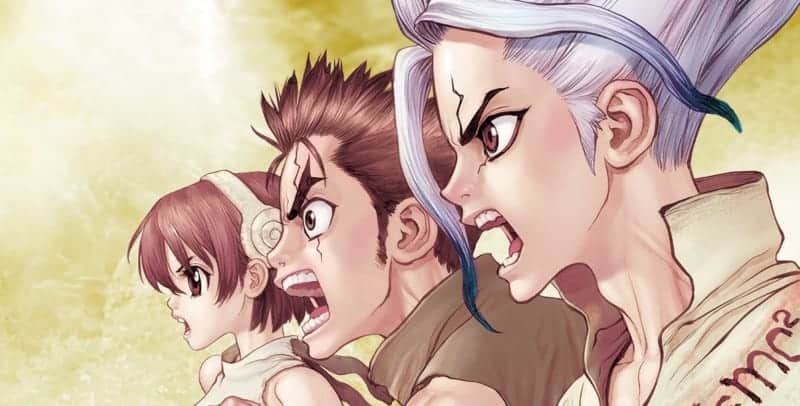 First of all, for those unfamiliar with DR. STONE, let’s break things down. DR. STONE follows two students, Taiju Oki and his friend, Senku Ishigami. One day, a light appears in the sky above both boys. Then, the light petrifies all of humanity, essentially wiping them from the face of the Earth by locking them in stone prisons. As the very basic facets of civilized life begin to rot and decay, most humans lose their minds. Hell, if I were frozen in stone for a couple centuries, I might too.

But Taiju, with the mind of a true shonen protagonist, stays his wits for 1000 years. After he and Senku eventually escape their stones, they free a fellow student named Tsukasa Shishio. As multiple humans get freed and rebuild society, the survivors clash over whether or not everyone out there is deserving of revival. Senku creates a faction to free humanity. Conversely, Tsukasa culls undeserving adults.

If that alone didn’t get you hyped for the series, the announcement of its anime certainly will. Despite being less than a 100 chapters into its manga, it’s already getting an anime. It’s a great indication of value for a manga to land adaptations this early. Given the latent popularity and quality of DR. STONE, this isn’t surprising. You can see news of the announcement in the form of a tweet from Moetron News. Check it out here:

A TV anime adaptation of Riichiro Inagaki's manga series "Dr.STONE" has been green-lit for production. Yuusuke Kobayashi will play the role of Senku Ishigami. It will air in Summer 2019 https://t.co/UMtnPERMP9 pic.twitter.com/mBaWVVZU5V

The mere possibility of seeing some of the breathtaking panels from the manga in action is amazing. Even more, Moetron News announced that Yuusuke Kobayashi will serve as the voice actor for protagonist Senku Ishigami. The actor played Natsuki Subaru in the iconic isekai series RE:ZERO and did an absolutely amazing job. So, having him on the lineup will only make what is a great series greater.

Get Pumped for DR. STONE!

We’re excited, and you should be too. Epic series get lots of attention, but rarely do they have unique concepts. DR. STONE combines strong character development with a stupendous concept. On top of that, it’s going to have some masterful voice acting if Kobayashi is the standard for its main character. As a result, we have a prime contender for a must-watch of 2019 before 2018 even ends.

DR. STONE, based on the information from Moetron News, will air in Summer of 2019. That means just about half a year until one of the most intriguing sci-fi anime hits the screen. In the meantime, you can pick up the manga from VIZ. Trust me, you won’t regret it. Even more, the first chapter is free online!