- Fun designs and aesthetic
- Characters of color
- Keeps you guessing

Just like its vagabond set of main characters, CANNON BUSTERS is hard to pin down. It has elements of both fantasy and sci-fi as well as the future and the past. To some, it seems more like a confusing mix of other media rather than a single entity. However, the seemingly contradictory nature of the show provides a benefit. It’s not meant to be looked at like an overwhelmingly piled-on dish. This anime is a viewer’s buffet. The trick is learning to find the things you want.

CANNON BUSTERS tells the tale of an outlaw named Philly the Kid. Cursed so that he can never die, he blows through towns in his enormous pink Cadillac-mecha, Bessie. His solitary life gets thrown aside when he meets two robots, companion bot Sam and engineer Casey. The two corral Philly into helping them look for Sam’s missing best friend, Prince Kelby. But with a dark force also searching for the prince, and a number of people on the lookout for Philly, this mismatched crew has as much trouble surviving as they do on their mission.

Released in August 2019, this Netflix show offers a lot packed into one series. From Western showdowns to fantastical powers, CANNON BUSTERS’ eclectic nature provides for a variety of interests. With a show this varied, can it blend cohesively?

LeSean Thomas, the series’ creator, described the show as “Think THE WIZARD OF OZ meets HIDDEN FORTRESS with a dash of ESCAFLOWNE + Hip Hop and classic RPGS.” Clearly, that’s a lot of influences. But that’s the nature of a cross-cultural creation.

CANNON BUSTERS is a collaboration between several well-known figures in the animation world. Aforementioned creator LeSean Thomas worked on famous series like BLACK DYNAMITE, THE BOONDOCKS, and LEGEND OF KORRA. His colleagues in creation included Tim Yoon (LEGEND OF KORRA), Eric Calderon (AFRO SAMURAI), Bahi JD (PROMARE), and Joe Madureira (UNCANNY X-MEN). With the animation studio Satelight, we also receive the input of Thomas Romain of CODE LYOKO, SPACE DANDY, and OBON STAR RACERS. Once Netflix came along, we received the talents of many others, including Natasha Allegri of BEE AND PUPPYCAT. 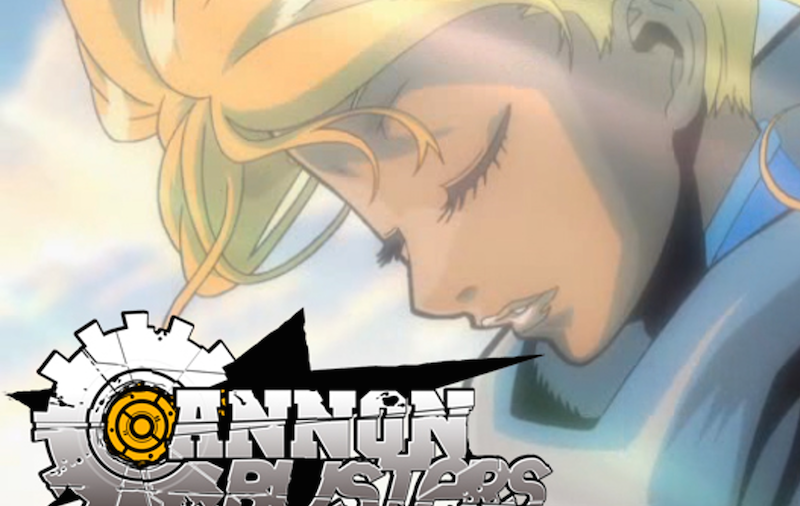 The image from the original Kickstarter for CANNON BUSTERS. | Image: Kickstarter

Having input from creators of different backgrounds is part of what gives CANNON BUSTERS its charm. It’s more than an anime following in the footsteps of anime before. It has influences from around the world and from multiple media sources. That background comes through so strongly in certain parts of the series. For example, we can see its RPG influence in the way Sam thinks about her new friends. The music and her manner of speech in these moments draws upon the classic RPG line, “_____ has joined your party!” Not to mention, that’s how we get fun mixtures of media that are fun partially because we’ve never seen them before. How many mechs are made of classic cars, contain an arcade game, and have a cow-themed transformation? That’s the kind of thing you can only get with a real meeting of the minds.

One of the most standout parts of CANNON BUSTERS is its design. The settings range from cities to deserts to fantasy forests. Even the architecture, rather than drawing off one idea, ranges from medieval European to traditional Japanese. The diversity extends past the series’ backgrounds. No two characters look exactly alike. Aliens, furries, and robots are all equally common. Even the main cast has more facial and body diversity than seen in some anime. 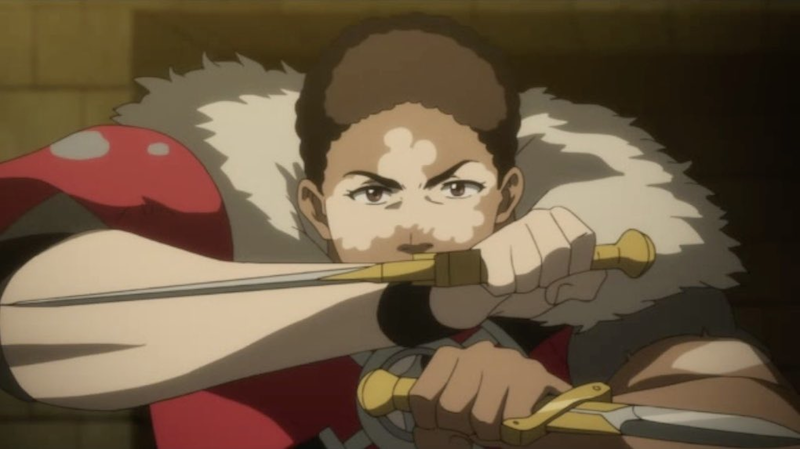 Hilda exudes coolness and power from every pore. | Image: Twitter

For example, take the women in CANNON BUSTERS. Often, anime only features women who are cute or “sexy.” Here we add another body type to the equation: big bara ladies. Characters like Hilda and Bridge are muscly powerhouses who stand out in a usual anime lineup. They also play a relatively large role in the series rather than fading to the background. While some of the body-diverse characters do get pushed aside, like the plus-sized villainesses Mama Hitch and Lady Day, the overall impact of the women in the series was positive.

Speaking of diversity, one of the coolest features of the series is its primarily black main cast. I’m not qualified to talk about the larger implications of this. But I know that we don’t see a lot of black cast members, let alone multiple black cast members, in anime. It’s a welcome change of pace.

As a final note on the art, let’s talk about Bessie. She’s just great. She uses 3D animation, a common technique for mechs lately. Fun fact, her color change from pink to red works great with traditional bullfighting. The matador switches from a pink flag to a red flag when it’s time to kill the bull. And Bessie is out for blood!

CANNON BUSTERS starts off with a main plot and a subplot. With Sam’s journey as the main story, Prince Kelby’s trip to Gara’s Keep acts as the subplot. Kelby’s plot points have an ominous tone. So, their timing clues in watchers that something is not right. Ultimately, the short glimpses into his trip provide suspense. And they do it well.

However, the writing did feel a little jumpy at certain points. The flow from backstory to current story seemed less smooth than transitions between subplots. The difference in fluidity gives the impression that the writers really wanted to get the background out of the way. This way, they could focus on the fun and drama of the ongoing story. That being said, it’s still season one. Creators have to provide an introduction to the series regardless of what they want to accomplish. It wouldn’t be the first show to be rushed through its storytelling. 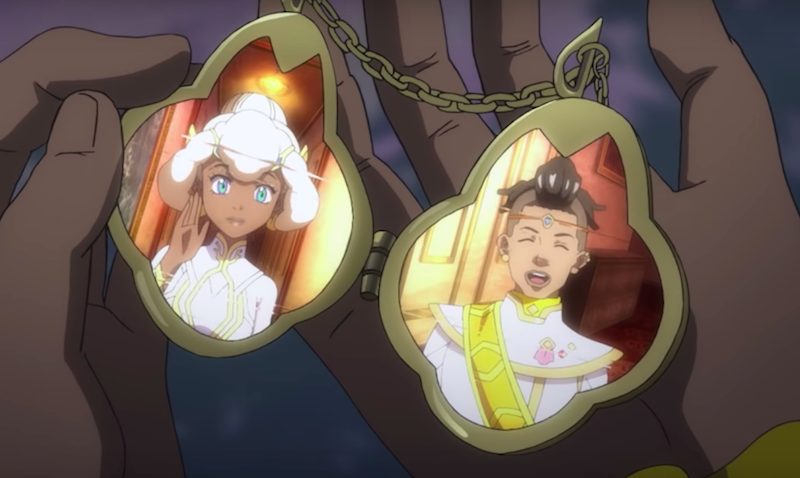 Sam’s background with Kelby were the first flashbacks to throw me off. | Image: YouTube

Next, some actions in the show were predictable. This was primarily due to the show’s use of tropes. Still, it wasn’t different from any other anime. Some might even say anime’s tropes are part of its charm. Rather, in CANNON BUSTERS’ case, the show’s heavy use of tropes might help keep the audience on their toes. Many characters or situations fit old archetypes so well that they end up conflicting. You can’t tell which one will prevail. For instance, both Odin and Hilda had buildup that could have predicted their deaths. Figuring out which death would come, or come first, became difficult to know. I personally think that, as long as the predictable quality doesn’t get in the way of enjoying the show, playing with the tropes is fine.

Modern anime is global. The new wave draws inspiration not just from traditional anime, but from foreign media and creator’s preferences. In the past, debates over whether an anime is “anime enough” have wound up taking shows out of consideration. Rather than abstaining from critique, I think it’s time to expand our ideas of what anime can be. And, based on anime as I understand it, CANNON BUSTERS deserves its place at the table. 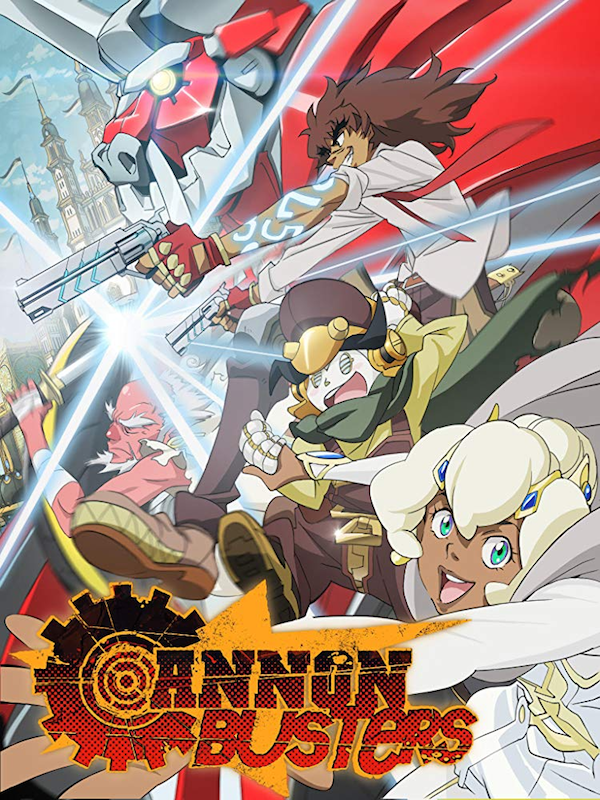 Look at these cuties and tell me you don’t love them. | Image: IMDb

For me, the design played a huge part in my attention to the series. The creators on CANNON BUSTERS really got creative. The show is like a cork board of connections. The creators found ways to put together the things they love, from character archetypes to design to themes. It is so clearly a labor of love.

Here’s the thing, though: people are going to look for reasons to hate this show. It happens to every anime, or any media even. But CANNON BUSTERS runs the risk of being highly targeted. It has its problems, but they’re nothing that other shows don’t have, too. Don’t let people say CANNON BUSTERS isn’t good. I guarantee their nitpicks will be things common in other beloved stories. It’s just as good as any action anime out there right now, if not better.

As such, here is my takeaway: I liked CANNON BUSTERS. I did not get bored and stop watching partway through. And, whenever it comes, I will watch season 2. I think this one is a crowd pleaser, and I look forward to what comes next.

CANNON BUSTERS had many more interesting I didn’t get to mention. What did you notice in the series? Let us know in the comments below!