We all know people with unfortunate names, like North West. But when it comes to names that scar children for life, the protagonist of AO-CHAN CAN’T STUDY takes the cake. 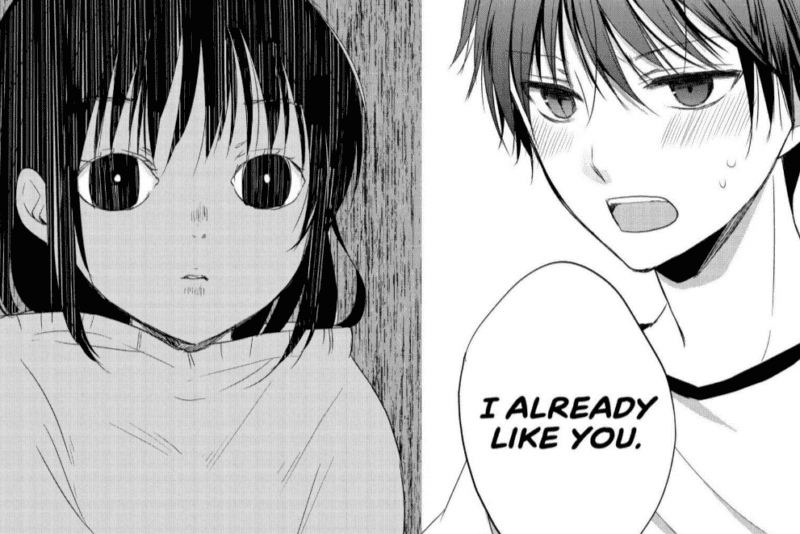 All this changes when, through a series of mishaps unsurprisingly orchestrated by her perverted father, Ao finds herself at the center of Takumi Kijima’s affections. Takumi, a classmate and one of the boys she claimed to loathe simply for existing, crushes on Ao from afar. During a conversation, he misinterprets her words and takes it as a confession when she was really saying the opposite. Comedy ensues, and eventually, Ao finds herself completely unable to focus on her studies. Ao’s world flips upside down as she realizes her growing affection for Takumi.

Ren Kawahara’s AO-CHAN CAN’T STUDY illustrates the misadventures of a girl who just wants to study in peace without her father and classmates bothering her. With its raunchy comedy and use of tropes, this first volume brings forth an interesting take on classic romantic comedy manga.

That’s What She Said

From the basic premise alone, AO-CHAN CAN’T STUDY already raises some eyebrows. The first few pages brought out the seasoned manga-reader within me, armed to take whatever raunchy, over-sexualized characters AO-CHAN was going to throw at me. AO-CHAN delivered its cringe-worthy comedy as expected, making uncomfortable jokes and visual gags. The innuendos and tropes were so overwhelmingly ridiculous that AO-CHAN can’t be taken seriously. Fortunately, that does work to the manga’s advantage. 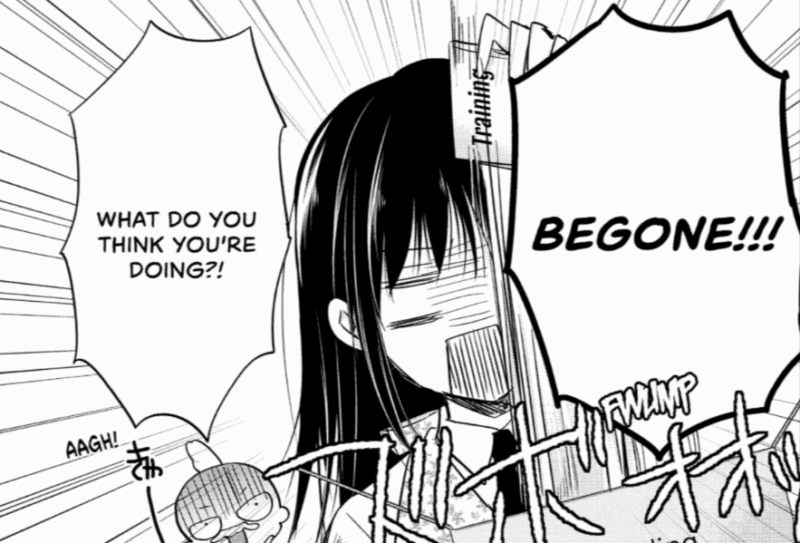 When taken as a parody of other raunchy manga, AO-CHAN CAN’T STUDY delivers well. Ao’s unfortunate mishaps both at school and at home are entertaining to watch, especially since she declares her hatred of boys so vehemently. The tropes Kawahara uses, such as exaggerated anatomy and stunts pulled by Ao’s meddling father, can only be interpreted ironically. The biggest clue that AO-CHAN might be ironic is the story behind Ao’s name, which is difficult to take seriously.

However, it doesn’t always read that way. The humor sometimes goes too far, and comedic scenes quickly fade into an abstract uncertainty. Ao, who is conflictingly both very innocent and very knowledgeable, sometimes makes comments or does things that are completely uncomfortable. In these moments, her actions have no comedic value; they’re just gross and weird. When graced with a moment alone with Takumi on the school rooftop, Ao can’t help but think about how big Takumi’s hands are — and you can make your own assumptions about where her thoughts go after that. Scenes like these show AO-CHAN’s true colors. Its strange, disturbing humor makes you take a step back and question why such a thing exists. Sadly, there’s no definite answer to that question. Sometimes manga gets uncomfortably weird and we just have to accept it and move on.

The Art of AO-CHAN CAN’T STUDY

It’s not all bad stuff, though. While the origin of Ao’s name is unfathomably messed-up, it’s also a little funny in a dark, ironic way. That dark sense of humor seems to be the main theme throughout this first volume and it takes some effort to appreciate that humor underneath the fan service. Despite how messed-up he can be at times, Ao’s father is also a little entertaining. 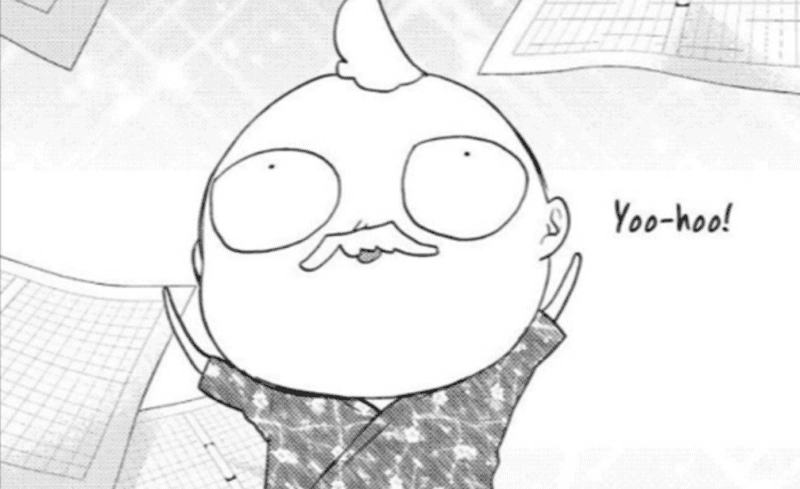 The root of all chaos in Ao’s life. | Image: Kodansha Comics

His mischief, when it’s not destroying Ao’s social life, provides comedic divine intervention throughout her encounters with her classmates. What makes him so charming, however, is his design as a character. Whereas the rest of the cast boasts a typical manga style with dewy eyes and copy-paste body proportions, Ao’s father is a caricature of sorts. Drawn with a small, round, and a mostly featureless frame, Ao’s father is somewhat reminiscent of the grandfather from RANMA 1/2 — unsurprising since their personalities are pretty similar.

Other than Ao’s father, the art of AO-CHAN doesn’t drop any jaws. It’s by no means amateur or sloppy, but it’s also not phenomenal. The art provides decent imagery of the school, but the environment and characters fail to stand out.

A Different Kind of Romantic Comedy

Besides her father, Takumi is the only character that stands out. Despite how many times Ao and her father manage to mess up their encounters and inadvertently turn normal conversations into something weird and sexual, Takumi persists with his pursuit of Ao’s affections. Ao thinks he’s just another dirty-minded boy, but Takumi turns out to be much different from her expectations. When she discovers Takumi went to a mixer, she assumes the worst. Later, she finds out that Takumi only went to the party to get love advice about his crush on Ao. Although Takumi isn’t exactly a saint himself, he’s pretty wholesome in retrospect. His character definitely helps to tone down the rampant risqué humor.

AO-CHAN’s art and characters aren’t especially remarkable. The manga’s overall concept isn’t terribly groundbreaking, either. AO-CHAN CAN’T STUDY is another high school romantic comedy that reuses tropes like love triangles, perverted old men, and innocent, conservative girls who don’t grasp the underlying innuendos in their speech. The only fresh take AO-CHAN brings to the table is its somewhat self-aware commentary on smut. Even so, the simple concept works for AO-CHAN. It’s not meant to be anything substantial, so I don’t expect its characters to surprise me with profound philosophical revelations or eye-widening developments. And as a potential parody of that sub-genre of manga, it works.

Not Safe for Ao

As a straight-up romantic comedy, AO-CHAN CAN’T STUDY misses key points and fails to recognize when it crosses the line. The humor gets especially uncomfortable when Ao, in her paradoxically innocent yet perverted manner, makes comments about the boys in her class through her internal monologue. AO-CHAN CAN’T STUDY clashes with a seemingly ironic sense of humor and this uncomfortable commentary. No real person could ever be as perverted as the characters in this manga, and seeing characters portrayed that way is uncomfortable. The jokes are a little too sexualized for my taste, although I could see how that kind of humor could be someone else’s cup of tea. As a parody of hyper-sexualized manga, on the other hand, AO-CHAN CAN’T STUDY does the job of pointing out how intrinsically flawed these works are. It just can’t seem to make peace with itself and its genre. 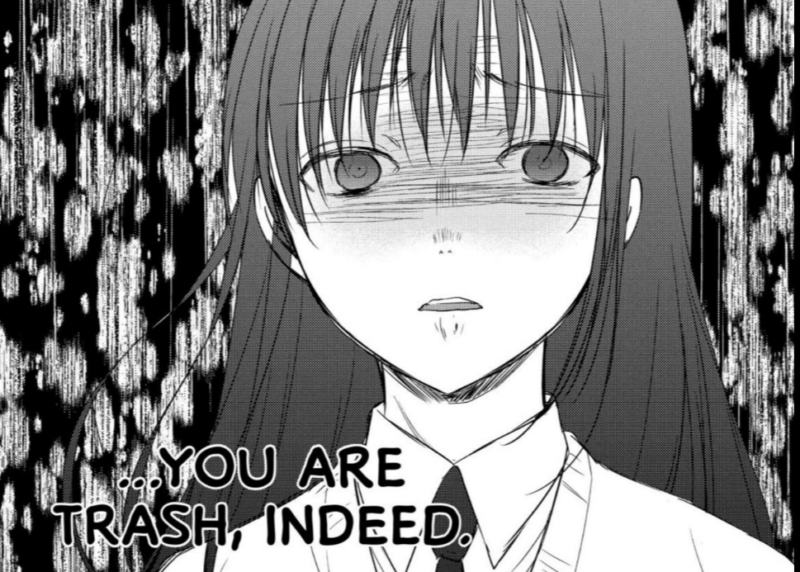 AO-CHAN CAN’T STUDY teeters dangerously on the edge between entertaining parody and uncomfortably raunchy. In the beginning and throughout, readers are hit by a constant barrage of innuendos and risqué humor. However, by the end of the first volume, it does seem like Ao and Takumi are on their way to the start of a much more substantial and morally acceptable relationship together. If AO-CHAN tones down the humor a bit, I feel like it could go places. Still, it’s likely to always be the kind of manga that requires an odd sense of humor to enjoy. With the promise of more volumes to come, I hope that Ao gets some relief from her father’s mischief and that maybe Takumi realizes that Ao doesn’t mean to be the walking innuendo she appears to be.