How Anime Uses Nature Scenes to Manipulate Us

by Melissa Padilla on November 16, 2018
Anime Analysis
79
0
previous article
DR. STONE is Getting An Anime Series!
next article
Seichi Junrei Magic: The Appreciation of Photorealism in Anime
Contents

Warning! Spoilers for MY NEIGHBOR TOTORO and SPIRITED AWAY ahead.

The sound of cicadas in late summer. Cherry blossoms at the beginning of a new school year. The start of a midday rainstorm. These images show up in anime all the time. Scenes like these serve as more than the chance to see the natural beauty of Japan. They manipulate the way the viewer engages with the material.

Studio Ghibli’s films delight and inspire anime fans around the world. One of the things that makes these movies so great is the creators using every possible method to tell their story. This includes the setting. When characters aren’t speaking, the background is. For the purpose of this exploration, we’ll examine a selection of Miyazaki movies, namely MY NEIGHBOR TOTORO and SPIRITED AWAY. The role that the natural world plays in these films is clear, making them fantastic examples of the technique. By examining the way that these movies display the natural world, we can watch the manipulation of the plot unfold in real time. Learn the secrets behind your favorite films, and enjoy them all the more.

Watching the Setting Changes Your Mood

One of the most common ways to use a story’s environment is in setting the mood. Maybe you remember your ninth grade English teacher going on about why the curtains are blue. Thankfully, it’s a little less dull in your favorite anime. Here are a few ways in which creators direct the mood to their needs. 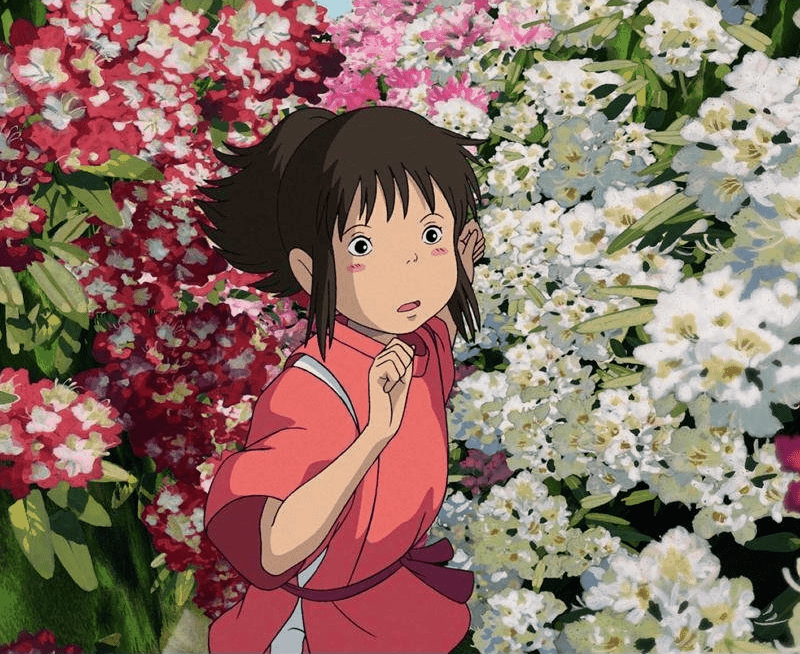 Chihiro running through the gardens to see her parents in SPIRITED AWAY. | Image: IMDb

First off, color does actually affect mood. In MY NEIGHBOR TOTORO, we get a lot from the greenery. They live in a lush, vibrant environment, so nature and life are always at the forefront of the story. Contrast this with SPIRITED AWAY’s introduction to the stink/river spirit. He comes in the night, in the rain, shrouded under darkness and gray. This translates into something mysterious or even sinister. It alludes to the fact that he’s not what he seems.

The growing state of plants also impacts mood. In SPIRITED AWAY, we see colorful, blooming flowers when Chihiro travels through the garden with Haku. While there, she gets the relative safety of a place outside Yubaba’s direct control and the relief of Haku’s kindness after doubting his intentions. In MY NEIGHBOR TOTORO, Mei and Satsuki spend time in Granny’s garden, surrounded by ripe vegetables. They talk about their mom coming home, and her hopes of improved health. The fruitful garden reflects the feeling of hope and health the girls desire.

A final, and effective, feeling in both movies is a sense of grandness. Both the sea formed from the rain in SPIRITED AWAY and Totoro’s giant camphor tree in MY NEIGHBOR TOTORO expand farther and wider than anything else in the movies. These features convey the sense of majesty that matches the strong themes of experiencing something beyond our reality.

Backgrounds Give Us A Chance To Catch Our Breath

In American media, shows are action-packed. From beginning to end, each part tries to make you laugh, cry, or gasp. But in trying to force these reactions out of the audience, the shows don’t allow the brain a moment to rest. Space gives the audience time to digest and gain a deeper understanding of the story. It’s here that Ghibli movies excel. Rather than packing their movies full of action, there are intentionally placed breaks, usually involving a shift to focus on the setting. This shift allows the watcher to process everything that’s happened and prepare for what comes next. 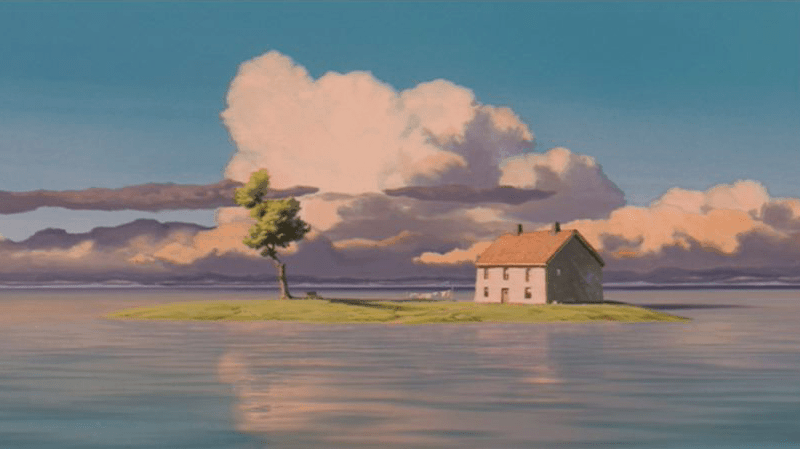 The house Chihiro passes on the train in SPIRITED AWAY. | Image: IMDb

For example, in SPIRITED AWAY, Chihiro takes the train to the witch Zeniba’s house to try to save an injured Haku. She leaves for the train directly after No Face attacks the bathhouse. Tonally, there’s a drastic shift from the chaos of the bathhouse to the still waters of the newly formed ocean. Chihiro watches the world pass by on the train, featuring distant towns and a slow sunset. The scene, in addition to showing the transition state of the afterlife, provides a break for the audience. We get to see Chihiro’s concerns playing out on her face, and get to shift toward Zeniba’s life advice through a literal liminal space.

Scenery Takes Storytelling To The Next Level 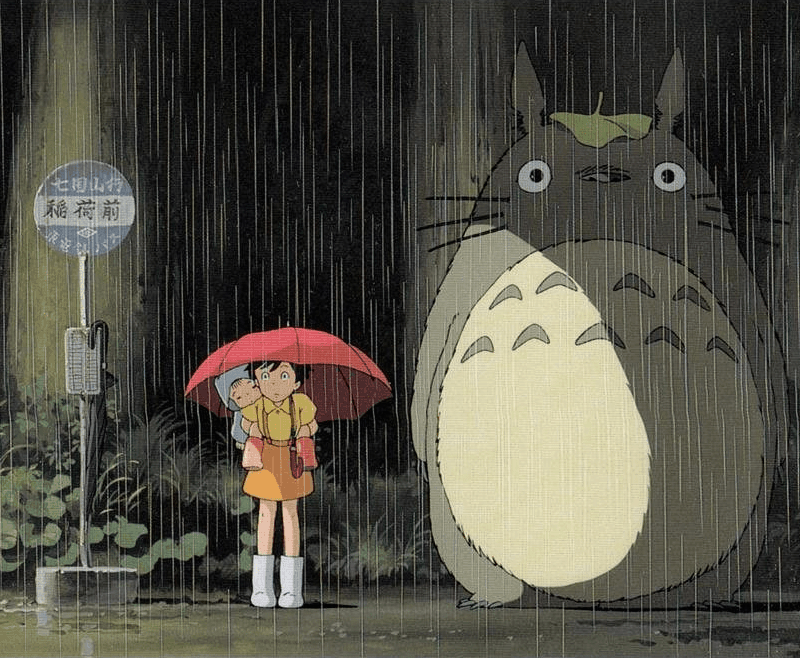 Satsuki meets Totoro for the first time in MY NEIGHBOR TOTORO. | Image: IMDb

Setting plays a major role in a story’s progress. Things like weather and season can affect the plot directly, foretell a future event, or reflect the existing plot. To illustrate, Miyazaki puts rain to excellent use in his films as an agent of change. In SPIRITED AWAY, the rain comes in on Chihiro’s first day of work. Rain is what causes her to bring No Face into the bathhouse. But it’s also there as Chihiro helps the river spirit and receives the medicine that she would later use on Haku and No Face. That scene sets her up for everything to fall into place for the rest of the movie. And it also marks a change in Chihiro’s attitude — where she first starts to transition from a “spoiled kid” to a hard worker.

Similarly, rain brings change in MY NEIGHBOR TOTORO. The rain begins as the girls walk home together. On one hand, it gives neighbor Kanta the chance to be nice to the girls, foreshadowing his role helping them later. But more obviously, the rain sets up the chance for Satsuki to meet Totoro. Even further, this is how she meets Cat Bus for the first time, which is a crucial aspect in finding Mei later on.

Seasons play a major role in TOTORO as well. Each season has a different association; spring is new beginnings, summer full of life, etc. TOTORO follows the Kusakabe family through the seasons in accordance with their associations. The story begins in late spring or early summer and climaxes later in the summer. And, appropriately, the scenes during TOTORO’s credits depict the Kusakabe family in fall. This follows autumn’s associations with things coming to an end. 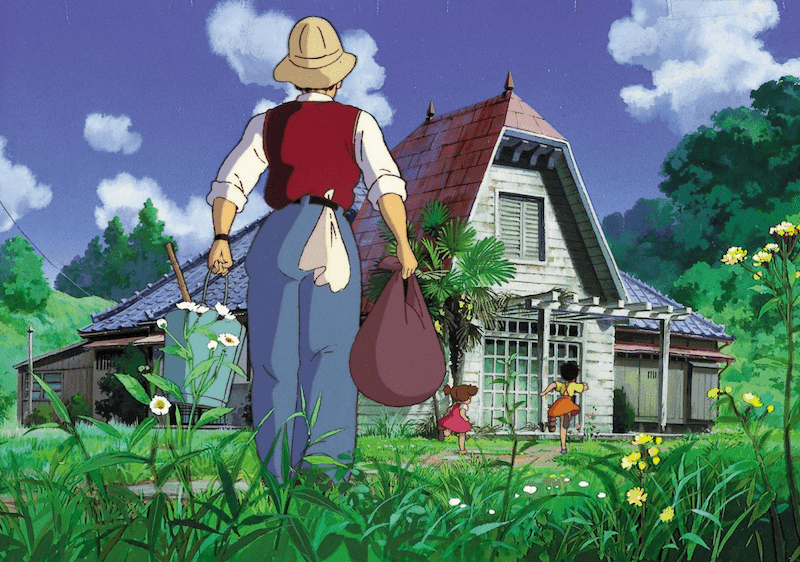 In Japan, there’s a system of aesthetic value called wabi-sabi. It’s a visual representation of the idea that being surrounded by natural, changeable objects helps people connect to the world. “Wabi and sabi” originally meant “loneliness of living in nature” and “lean or withered.” Now, however, it refers to a kind of rustic simplicity or “beauty with age.” The style respects the beauty of imperfect, incomplete, and impermanent things. As a result, wabi-sabi focuses on signs of things coming and going, simplicity, asymmetry, roughness, and appreciation of nature and its processes. For example, someone might enjoy the look of a flower budding or wither over one in full bloom. The principles of wabi-sabi can be seen all over Ghibli movies.

In SPIRITED AWAY, we receive our share of beginnings and endings, often at the same time. We meet Chihiro as she moves to a new house. Her first-ever bouquet withers from her clutching it so tightly. Then we get wabi-sabi again when we see Zeniba’s house. Her simple farmhouse is made primarily from wood and straw, which are natural, age-able materials. Often, lines are rough and crooked at her cottage, as with her ladder and fence. It makes a pleasant home for communion with nature.

Similarly, the Kusakabes move to a new house in MY NEIGHBOR TOTORO. Their new house is very old, literally decaying when they first move in. With sliding doors and windows, the house is ideal for enjoying the natural landscape. Closeness to the camphor tree even convinced Mr. Kusakabe to move there. So alongside the house’s attributes embodying wabi-sabi, Mr. Kusakabe personally values wabi-sabi as well. Thus, the two movies not only show wabi-sabi in their design choices, but also in their characters’ mindsets.

In wabi-sabi, there’s the idea that the most basic, natural objects can be interesting and beautiful. Ghibli movies embody this idea in the way they present nature. And, of course, so do many other anime. The sound of cicadas prepares us for the end of summer and the end of old situations. Cherry blossoms bloom in spring and tend to reflect new beginnings. Wabi-sabi dictates that it takes a quiet mind and trained eye to see the truth of nature, and anime presents something with which to train our eyes. By watching, the ideals integrate into our consciousness.

Now, as anime fans become inspired by their favorite shows, evidence of wabi-sabi creeps into work all over the world. Cartoons in the US might cut in scenes of nature. Settings might include the change-sensitive elements of wabi-sabi. They might even take storytelling techniques directly from the source. In any case, examining the ways in which media portrays nature can be helpful in understanding any piece of work. If not for fun, then maybe even for a wabi-sabi sense of enlightenment.

In what ways have you seen creators use nature to affect your experience? Let us know in the comments below! And if you’re looking for more on anime scenery, check out our top anime settings of 2017.